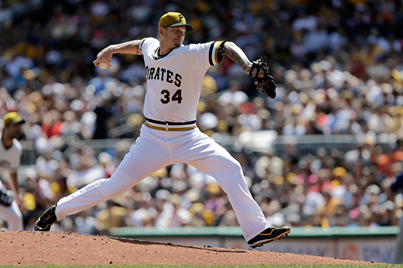 For the second time this season, a Pittsburgh Pirates pitcher pitched a complete game.  Today that honor went to A.J. Burnett, who finally got some run support, to pick up his fifth win of the season in a 5-1 win over the Colorado Rockies.

A.J. was strong all day allowing one run on eight hits, while striking out nine and walking one.  The only run he gave up came in the seventh inning on a Jonathan Herrera RBI single to right field.  With an off day tomorrow, this complete game also gave the bullpen an extra day off and that is huge as they enter the stretch run of the season.

The offense gave Burnett a lot of support today, which is something that has not happened very often this season.  It started in the first when Andrew McCutchen hit a single to right that would score Starling Marte.  Two innings later Garrett Jones would hit a sacrifice fly to left center to bring in Neil Walker.  The fifth inning is when the Buccos broke the game open, Russell Martin hit his tenth home run of the season, a three run shot, to left field to give Pittsburgh a 5-0 lead.

After losing Friday night it was big for the Pirates to win the next two, since St. Louis took two of three from Cincinnati.  The Buccos currently lead the Cards by 1.5 games in the Central Division.  Pittsburgh now must seek some revenge on the Miami Marlins beginning Tuesday night in the first of three games to take place at PNC Park.