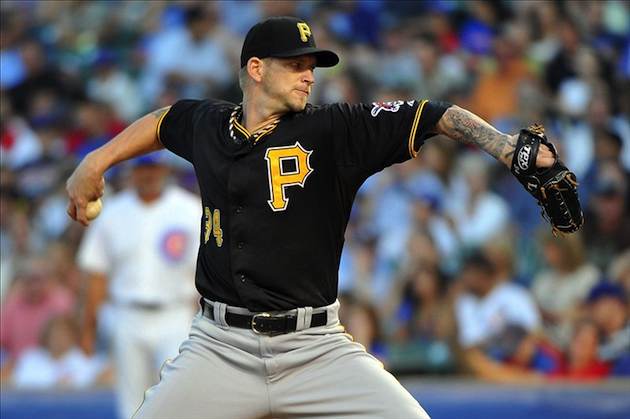 Last night, the Chicago Cubs destroyed Pirates pitching for 14 runs on 14 hits, including a nine-run fifth inning on their way to blowout win over the Bucs at Wrigley Field.  Tonight, the Cubs managed just one hit, and it took them 23 outs to get it against A.J. Burnett.

The Pirates’ ace pitched a complete game one-hitter, striking out eight while walking just two on his way to his 13th victory of the season, and even more importantly, the Bucs’ 59th win of the year.  With two outs in the eighth inning, after a few near misses by Burnett on a strike three call, Adrian Cardenas hit a pinch hit single to break up the no-hitter, which was appropriately followed by a standing ovation from the crowd at Wrigley Field.

Neil Walker was the offensive leader for the Pirates tonight, going 1-3 with a grand slam, a sacrifice fly, and five RBI’s.  Andrew McCutchen added three hits, bumping his MLB leading average to .371, while Pedro Alvarez added a pair of hits as well.  After an onslaught to begin the game in the first inning, the Bucs’ offense was rather quiet the rest of the way, but given the incredible performance by Burnett, it was more than enough.

Make no mistake; this was a huge victory for the Pirates.  Not only did they end a two-game skid tonight, but they also won a game solidly for the first time in about a week.  Wrigley Field is a difficult place to play, and the Cubs have been playing well lately, so this was a big game for the Pirates to win, and now they have a strong chance to win the series tomorrow afternoon.

As we have been detailing all day, the Pirates have made a number of moves acquiring some interesting names leading up to today’s trade deadline, including Wandy Rodriguez, Travis Snider, and Gaby Sanchez.  With the victory, the Bucs remain three games behind the Cincinnati Reds in the N.L. Central.  They’ll look to win the series over the Cubs tomorrow afternoon, as Jeff Karstens will take the mound for Pittsburgh against Chicago’s Travis Wood.  First pitch is scheduled for 2:20pm EDT.