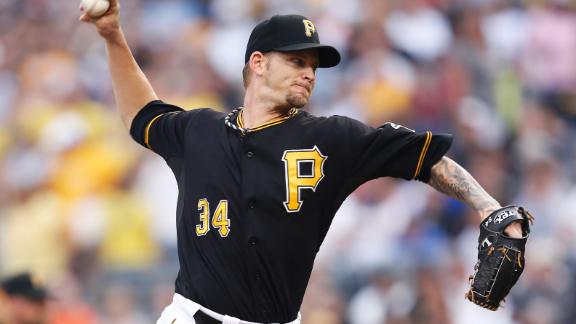 As great as things have been going for the Pirates this year, they have been that bad for the Miami Marlins.  Whether it’s been injuries or underproduction by some of their acquisitions from the offseason, the Marlins are in a much different position than most thought they’d be at this point in the year.  There was more evidence of that tonight, as they helped gift-wrap a 5-1 lead for the A.J. Burnett and the Pirates at PNC Park.

Carlos Zambrano was on the hill forMiamitonight, as, as we’ve seen in the past, the mental games were playing a role, and the Pirates, who have been using the homerun as of late to score runs, used patience at the plate to do the bulk of their damage in this game.  The Bucs, as a team, forced seven walks by Marlins’ pitchers, including the four-run fourth inning which proved to be the difference in the game.

The Bucs managed just five total hits on the night, but they took advantage of one of the biggest breakdown innings of any team this season.  Rod Barajas and Clint Barmes led off the inning by getting hit by pitches.  After A.J. Burnett reached base on a throwing error, Alex Presley walked, and after a Neil walker sacrifice fly, Andrew McCutchen, Garrett Jones, and Casey McGehee all drew walks.  When all was said and done, Zambrano was pulled from the game, and the Pirates had a four run lead.

That was more than enough run support for A.J. Burnett, who, other than giving up a solo homerun to Justin Ruggiano in the second inning, was dominant on the mound.  He scattered eight hits and just the one run over 7.2 innings of work.  He is now 11-3 with a 3.59 ERA on the season.  He, of course, left to a standing ovation from the PNC Park crowd.  Brad Lincoln relieved Burnett by tossing an inning and a third of scoreless ball, including a strikeout to end the game.

Offensively, it was a modest night for the Bucs.  McCutchen had a quiet night at the plate, going 1-4 with three strikeouts.  Jones had two RBI’s without getting a hit, while Walker and McGehee had an RBI a piece.  Jordy Mercer also hit his first Major League triple tonight on a blast off the wall in center field.

With the win tonight, the Pirates improved to 31-14 at PNC Park, including a 20-4 mark in their past 24 home games.  They are now a season best 53-40 on the season, while their starter, A.J. Burnett, won his 11th game of the season.  Last year, the Pirates reached seven games over .500 before imploding down the stretch, but the more we see of this team, it’s becoming more and more obvious that this is not the same team as a year ago.  Guys like Burnett are a huge part of what’s going on in Pittsburgh right now…and it’s time for everyone to realize…this is not just a team playing good baseball…no, this is a good baseball team.

The Pirates will look for the sweep of the Marlins tomorrow afternoon at PNC Park as Jeff Karstens takes the mound for the 1:35pm first pitch.