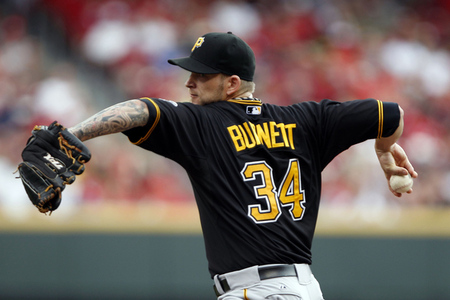 After visiting Cincinnati this weekend, the Pirates and their fans realized more than ever just how hot the Reds have been lately.  Entering this afternoon’s game, after taking the first two games of the series, the Reds had won five straight games, 15 of their last 16, and 22 of their last 25 contests.  Wow, that’s what we call a hot streak.

That’s exactly what made today’s 6-2 Pirates victory that much more satisfying.  The Bucs bounced back to within 4.5 games after a game which many fans were thinking of as a must-win.  After scoring just four runs in the first two games of the series, the Pirates scored six runs, which turned out to be more than enough support for A.J. Burnett.

Burnett was masterful once again today, nearly pitching his second consecutive complete game, giving up two runs on three hits while earning his 14th victory of the season.  After giving up two runs in the first three innings, Burnett settled in and mystified the Reds’ hitters, retiring 18 straight batters.  After walking Jay Bruce and Ryan Ludwick with two outs in the ninth, Burnett was pulled in favor of Joel Hanrahan who earned his 32nd save of the season by getting Todd Frazier to pop out to end the game.

Offensively, the Pirates offense came alive, scoring six runs on 15 hits this afternoon.  Neil Walker led the club with three hits, including a two-run homerun in the second inning, while Starling Marte hit a huge two-run triple in the fourth.  Andrew McCutchen hit his 22nd homerun in the ninth, while Garrett Jones and Gaby Sanchez added two hits each.

The Pirates end their road trip with a 6-4 record against the Reds, Chicago Cubs, and Houston Astros.  This game was a huge one to win for the Pirates, and, as we’ve said, who better to have on the mound than A.J. Burnett.  As we’ve seen all season, the Bucs have been able to respond to adversity and bounce back from losses to win a pivotal game.  That’s exactly what they did today, and now they’ve put themselves in position to build some momentum as they return home for an 11-game home stand against the N.L. West at PNC Park.

The Pirates are now 61-46, 4.5 games behind the Reds, kicking off their extended home stand tomorrow night against the Arizona Diamondbacks.  Without a doubt, this was a satisfying ending to a long road trip for the Bucs.