Byrd Homers In Pirates Debut In 7-1 Victory Over Brewers 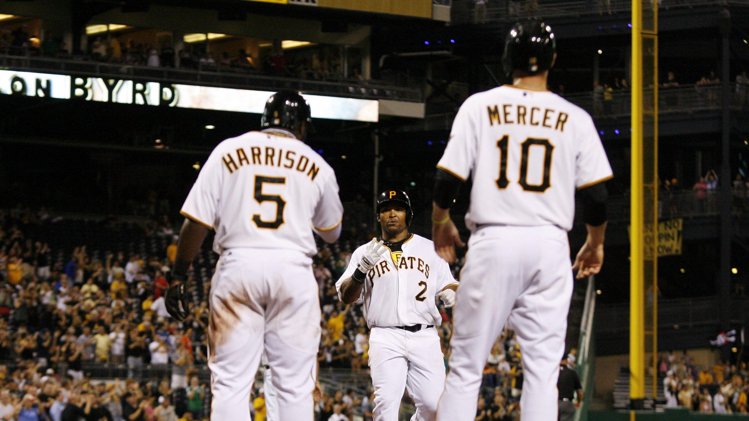 After the Pittsburgh Pirates lost their third game in a row last night to the Milwaukee Brewers, there was some worry across the Steel City.  Charlie Morton took the mound tonight, which also marked the debut for Marlon Byrd, who the Bucs recently acquired from the New York Mets.  It was a night led by Morton and Byrd, as the Pirates beat down the Brewers for a 7-1 victory at PNC Park.

The Pirates got off to a good start tonight.  Josh Harrison led off the first inning with a single, advanced to second on a Jordy Mercer walk, and scored on an RBI single by Andrew McCutchen.  The Bucs had a 1-0 lead before even recording an out.

Things opened up a bit in the middle innings for the Bucs.  Cutch led off with a single, stole second base, advanced to third on a Pedro Alvarez ground out, then scored on a seeing-eye single by Gaby Sanchez to increase the lead to 2-0.  They added two more runs in the fifth.  Jose Tabata led off with a triple and scored on a one-out single by Harrison.  Mercer’s RBI double off the wall then scored Harrison, and the Bucs had a comfortable 4-0 lead after five.

Morton got into a bit of trouble in the seventh inning.  The Brewers had runners on first and third with one out, when Russell Martin made a throwing error attempting to pick off the runner at first base.  The Brewers got on the board for their first run, chasing Morton from the game.

Pittsburgh got right back at it in the bottom of the seventh.  Harrison led off with an infield single and advance to second on a throwing error.  Mercer reached first and moved Harrison to third on a bunt single, setting the table early.  Byrd stepped to the plate and on the first pitch, hammered a three-run homerun to dead center field, giving the Bucs a commanding 7-1 lead.

This was a huge game for Morton, Byrd, and the Pirates tonight.  On a night when some fans out there were a little nervous about the team’s three-game losing streak, this was as convincing of a win as they’ve had in awhile.  Morton pitched a solid game, Byrd homered in his debut, and the Bucs closed in within a half game of the N.L. Central lead.

The Pirates and Brewers will get back at it tomorrow night at PNC Park in the rubber match of the series.  It’s a huge game and an opportunity for the Bucs to build momentum as they head into a huge weekend set against the St. Louis Cardinals.