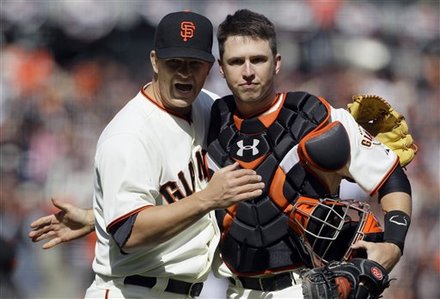 Well this is getting ridiculous.  The Pirates were just swept by the Los Angeles Dodgers in a series in which they scored a total of only four runs in three games.  It couldn’t much worse than that, right?

Hmm, well, maybe it can.  The Bucs faced the San Francisco Giants this afternoon at AT&T Park, and it got worse.  In fact, offensively, it was the team’s worst performance of the season…and considering how weak the bats have been in this young season, this statement carries a lot of weight.  But it’s true, today’s game against the Giants was the worst performance of the year by the Pirates.

Today was the Giants’ home-opener, and they played inspired baseball which was to be expected.  Aubrey Huff led the offensive attack with two hits, including a two-run homerun, and three RBI’s.  San Fran shut out the Bucs 5-0, sending Clint Hurdle & Co. to their fourth straight loss dating back to Tuesday.

Matt Cain was the story of the game, though, tossing a complete game shutout.  In fact, he allowed just one hit the entire afternoon, while striking out eleven batters!  Cain had a perfect game through the fifth inning, and he was deadly accurate throughout, getting ahead of batters and pitching in advantageous counts all game.

Who had the only hit for the Pirates?  James McDonald!  That’s right, the Bucs’ starting pitcher snuck a single through the infield for the team’s lone hit of the game.  Speaking of McDonald, he kept his team in the game throughout his 5.2 innings of work.  After giving up two runs in the first inning, J-Mac settled in, allowing just a single run thereafter.  In all, his stat line of three runs on six hits with three walks and one strikeout isn’t incredible, but solid enough that, again, should have given his team a chance to be in the game.

In another troubling scene, Joel Hanrahan gave up two runs on two hits in the eighth inning (Huff’s homerun).  Of course, “The Hammer” hasn’t been able to get out on the mound this week considering the fact that his team hasn’t led all week.

This afternoon’s game wasn’t televised, and for Pirates’ fans’ sake, I’m glad.  This was a horrible display today…one of the more frustrating games in awhile.  This offense is absolutely dismal right now.  They struck out eleven times today, which included three K’s by both Pedro Alvarez and Garrett Jones, while Alex Presley and Neil Walker each whiffed twice.

There’s no question that the Bucs have faced incredibly talented pitchers to begin this season, but still, these are professional hitters that are much better than what they’ve displayed thus far.  In seven games this season, the Pirates have scored a total of eleven runs.  Amazing.  Again, the pitching has been better than expected, and it’s shameful that the team has wasted these impressive efforts by the likes of McDonald, Erik Bedard, Jeff Karstens, and Kevin Correia.

The Bucs will try to snap their four-game losing streak tomorrow night in game two against Barry Zito and the Giants.  Charlie Morton will make his first start of the 2012 season, who will be starting for the first time since his hip surgery last October.

No more losing Pirates.  No long losing streaks.  The offense will break out of this.  After all, how much longer can this lack of offense continue?