Can Pedro Alvarez & The Pirates Offense Take Momentum On The Road? 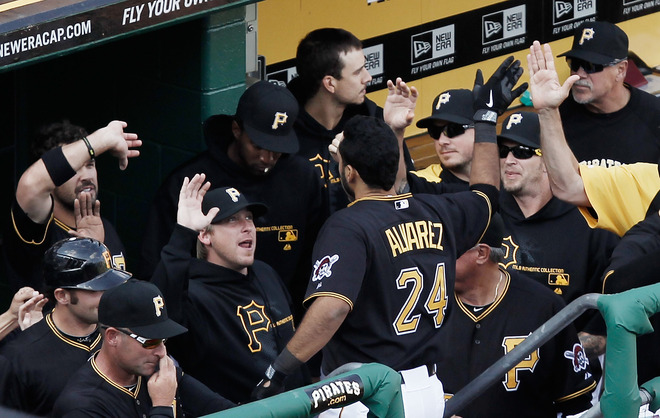 Yesterday afternoon, after another dismal performance in game one of a doubleheader against the Colorado Rockies, the Pirates’ offense ignited for five runs in the fifth inning.  Even though they didn’t score another run the rest of the game, it’s hard to deny the excitement off the biggest offensive inning of the season thus far.  The frame included an RBI double by Nate McLouth and an RBI single by Andrew McCutchen (yes, aided by Carlos Gonzalez’s problems with the sun), followed by back-to-back homeruns by Garrett Jones and Pedro Alvarez.

For Pedro, it was his second homerun of the day, as he crushed a solo shot in the first game of the doubleheader earlier in the afternoon.  The Bucs’ third baseman went 3-8 with two homeruns and a double in the twin bill yesterday, and hopefully (and perhaps blindly) for Pirates’ fans, this is just what he needs to begin the process of living up to the potential as has been suggested by his pedigree for the past two seasons.

This was a big step in the right direction for Alvarez and the Pirates’ offense, but only if they can continue this type of production on the road this weekend and beyond.

Here’s a clip from Pedro’s post-game interview yesterday after the Pirates and Rockies split the doubleheader:

Stay tuned to Fans From The Stands all weekend long for recaps and reactions, pre and post game shows, and a brand new edition of Bucco Beat live from Atlanta!