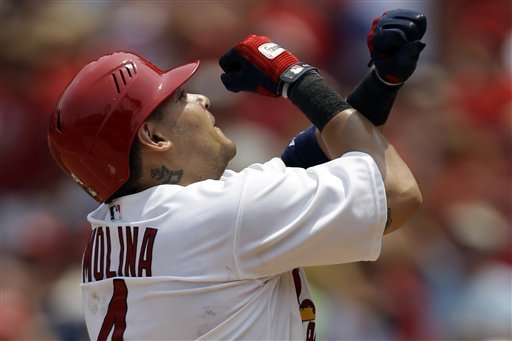 The Pittsburgh Pirates came into their finale with the St. Louis Cardinals with the opportunity to sweep the three game series at Busch Stadium.  While the Buccos battled throughout the game, the Cards had the final say, as they would win 5-4.

Erik Bedard had another rough day as he only lasted 4 2/3 innings.  His final stat line was five runs on eight hits with two walks and five strikeouts.  Two of those eight hits were home runs.  The first was a Yadier Molina solo shot in the second inning.  The other was hit in the third inning when Allen Craig hit a two run homer to center field.  The Cardinals collected two more runs in the fifth to cap the victory.

The Pirates offense hit the ball well today, as they totaled twelve hits, but were unable to collect on their scoring opportunities.  Eight men were left on base and they were 2-12 with runners in scoring position.  All four of the Pittsburghruns came in the fourth.  It started with a Clint Barmes single that scored Neil Walker.  Michael McKenry was up next and blasted a three run shot to give the Pirates their only lead of the day.

The bullpen was solid today covering the final 3 1/3 innings of the ball game.  Chris Resop, Juan Cruz, and Tony Watson all silenced theSt. Louis bats and gave their team the chance to earn a victory.

The big news of the day was that Andrew McCutchen was held out of the game due to a wrist injury.  The Pirates say that he is day-to-day, lets hope that this is not a serious injury, because if McCutchen is out of this lineup for an extended period of time, it would be a huge blow to this team.

The Pirates head home for seven games before the All-Star break.  They will begin a four game series with the Houston Astros tomorrow at 7:05.