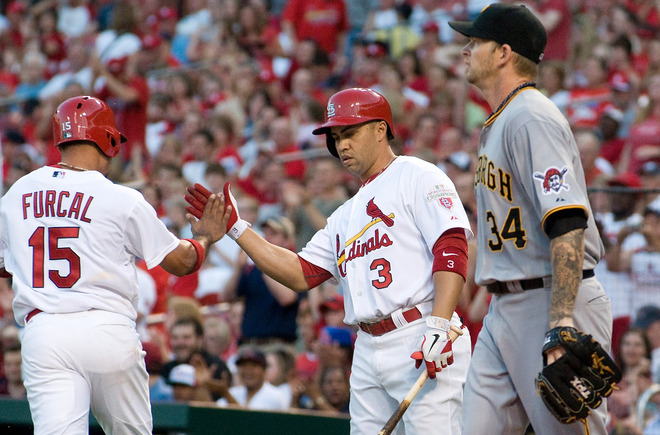 Many emotions ran through me while watching this game tonight, anger, disbelief, and finally relief.  Nothing went right for the Pittsburgh Pirates tonight and it would be easy for a fan to be mad and go on a long rant about how nothing has changed over the past twenty years, but everybody calm down it is just one game.  First off the St. Louis Cardinals are a very good baseball team and happen to be the defending World Series Champions.  Second, the Pirates started the game with their best player, Andrew McCutchen, receiving a night off.  Finally A.J. Burnett looked like the pitcher the New York Yankees were willing to give up.

The Cardinals were one fire tonight.  David Freese was the only starter not to record a hit and five starters had two or more hits.  No one was hotter than Carlos Beltran who would go 4-5, with 2 home runs, and 7 RBI.

Burnett had by far his worst outing of his career tonight as he allowed 12 runs on 12 hits while walking one batter and striking out 2.  His ERA is now at 8.04.  Let’s pray to the baseball Gods that this is the last time we see any type of pitching performance like this by any Pirates pitcher in 2012.

On the plus side, because that’s we always look for as Buccos fans, the bullpen was lights out tonight.  Brad Lincoln went 2.1 innings allowing 3 hits while striking out 2 and walking 1.  Chris Resop would go one inning striking out a batter.  Juan Cruz worked a scoreless seventh, which was followed by another scoreless frame by Jason Grilli.

Best thing I saw out of a position player was Rod Barajas being ejected for arguing balls and strikes in the second inning.  Manager Clint Hurdle decided he wanted to get an early shower and enjoy the sights of St. Louis, so he went out to argue and was ejected as well.  Great to see Pedro Alvarez continue to rake at the plate, he would go 2-3 tonight with a walk.  All three times he reached base, he came home to score, twice by Josh Harrison and once by Clint Barmes.  I imagine in the not to distant future we will see Pedro slotted in the four spot of the batting order.

Not like it can be any worse tomorrow, right?  In order for a season to be a success, teams have to avoid sweeps, which means tomorrows 1:45 tilt is a “must win” for the Pirates.  Erik Bedard will be trying to collect his second win of the season tomorrow, while Cardinals starter Jake Westbrook will look to improve on his 1.30 ERA and collect his fourth win of the year.