Cardinals Light Up Morton, Bullpen In Rout Of Bucs 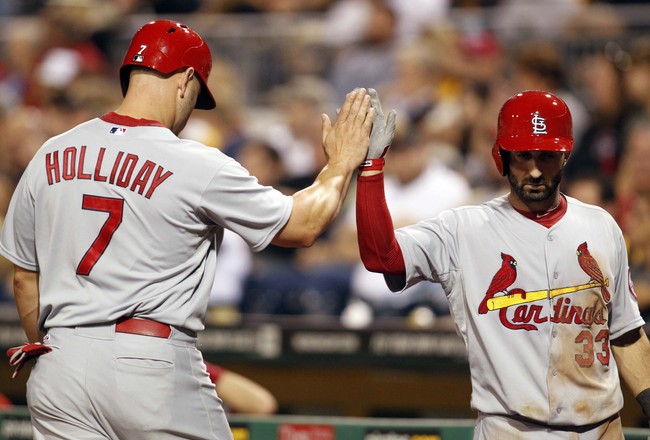 This week’s series between the Pittsburgh Pirates and St. Louis Cardinals had been the biggest and best of its kind in the ballpark’s history.  After outscoring the Cardinals 22-7 while winning the first four games of the series, the Pirates occupied a 2.5 game lead in the N.L. Central heading into tonight’s game.

Unfortunately, things took a dramatic turn in favor of the Cardinals, who beat up the Pirates pitching on their way to a 13-0 rout in the series finale.

Charlie Morton started for Pittsburgh tonight, and didn’t have his best stuff, to say the least.  After setting the Cards down in order in the first inning, Chuck struggled throughout the rest of his evening.  He somehow managed to sneak through six innings, and while his final stat line was far from impressive, it could have been a whole lot worse.  He gave up a total of five runs on ten hits in six innings before turning the ball over to what is typically a reliable and stingy bullpen.  Not on this night.

Jeanmar Gomez had the worst appearance of the season, giving up seven runs (six earned) on four hits with two walks, while only managing to get one out.  Vic Black came in and struggled as well, but eventually got the Pirates out of what turned into an eight-run seventh inning.

The Cardinals collected a total of 17 hits, including strong games from their top offensive hitters – Carlos Beltran, Matt Holliday, Adam Craig, and David Freese.  St. Louis put the best offense in baseball on display tonight, taking out some frustrations from the past few days out on the Bucs’ bullpen.

The Bucs’ offense struggled mightily against Joe Kelly, who tossed six innings while giving up only three hits.  Kelly did struggle with his control early, walking three straight in the second inning to load the bases.  But Morton came to the plate with two outs, and struck out to end the inning.  It was the closest the Pirates would get to scoring and making a game of it.

Starling Marte led the Pirates with two hits, while Jose Tabata had their first hit of the game in the fifth inning.

This was obviously not the way the Pirates and their fans wanted this series to end.  But still, despite this dreadful loss tonight, we have to look at the bigger picture.  The Pirates, in the biggest series of their season so far, took four of five games from a division rival.  This week, the Bucs proved to the Cardinals, the Cincinnati Reds, to the rest of the league, and to the fans, that they are going to be a force to be reckoned with down the stretch this season.

The Bucs will get back at it tomorrow night at PNC Park, kicking off a three game weekend series against the Colorado Rockies.  First pitch is slated 7:05pm.