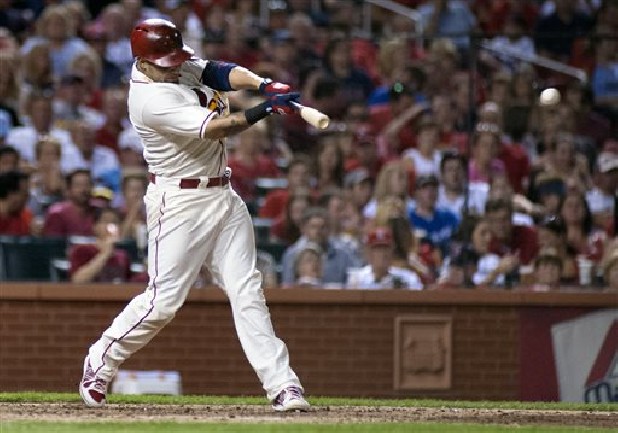 We could not have imagined a worse start to this weekend’s series between the Pittsburgh Pirates and St. Louis Cardinals.  The Bucs got a horrible performance from their starter, blew scoring opportunities in the first five innings of the game, and the bullpen the game get out of hand in the latter innings.  When all was said and done, the Cardinals beat up the Pirates 12-8 tonight at Busch Stadium.

A.J. Burnett started for the Bucs tonight, but didn’t have the impact the team wanted/needed from him.  Burnett was touched up for five runs on six hits through three innings, and was pulled in favor of a pinch hitter in the top of the fourth inning.

The Pirates’ bullpen, usually stingy in the run and hit departments, was awfully generous in St. Louis.  After Kris Johnson tossed two scoreless innings, the Cards got to Jared Hughes and Bryan Morris.  Hughes gave up three runs on three hits in one inning of work, while Morris gave up four runs on four hits, including a three-run homerun to Yadier Molina, without getting a single out.

And while the pitching was struggling, the offense was completely ineffective at getting runs across the plate.  The Pirates stranded runners on base in the first five innings of the game, including three in the first inning and seven through the first four.  Pedro Alvarez led the team with two hits, while Andrew McCutchen had a single and two walks.

Pittsburgh rallied for four runs in the eighth inning, highlighted by a two-run homerun by Josh Harrison.  They tallied a total of twelve hits for the game, but by the time they were able to push some runs across the plate, the game was already well out of hand.

They made things even more exciting in the ninth inning, scoring three more runs to bring the game to a 12-8 score.  But with two runners on and two outs, Harrison flew out to centerfield to end the game.

This was not the start to the biggest series of the season we were hoping for, especially in the fashion they lost.  With Burnett leaving the game early, the bullpen was taxed early in this game, and could have a significant impact in the other two games this weekend.  To make things worse, the Cincinnati Reds beat the Los Angeles Dodgers tonight, climbing a bit closer to the Bucs in the N.L. Central division.

The Pirates and Cardinals will face off again tomorrow night at 7:05pm.  The pressure is on the Bucs right now, and tonight, they buckled under that pressure.  Things need to change tomorrow night at Busch Stadium.