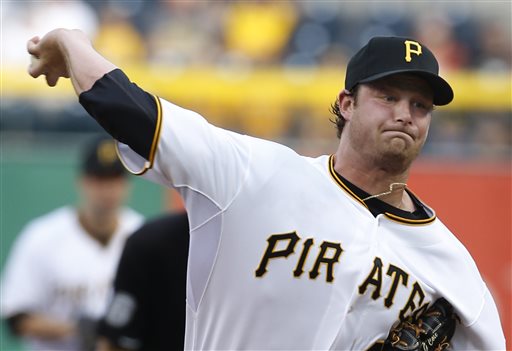 It was a special night at PNC Park.  Gerrit Cole, one of the more anticipated prospects in recent Pittsburgh Pirates memory, made his debut start against the San Francisco Giants.  He, along with a select few others, is speculated as being the future of the Bucs’ pitching staff.

Cole delighted the tens of thousands of fans who showed up at PNC Park, making a difference on the mound as well as at the plate as the Pirates beat the Giants, 8-2.

Showcasing his fastball to begin the game, Gerrit had the crowd stunned at his velocity, which topped out at 99mph.  After battling through the first pair of innings, he got on track, setting down 13 consecutive batters.  Cole lasted 6.1 innings, giving up two runs on seven hits, earning the first victory of his Major League career.

Pedro Alvarez was the offensive star of the game for the Bucs, going 3-3 with a homerun, two singles, and three RBIs.  Cole also pitched in a two-run single in the second inning to get the Pirates on the board early.  Andrew McCutchen had two hits and scored twice, while Starling Marte hit his first homerun in over a month in the sixth inning.

Tony Watson, Vin Mazzaro, and Bryan Morris combined to pitch 2.2 scoreless innings, sealing the deal for the Pirates on a very special night at PNC Park.  Even as high as the anticipation was for him, Gerrit Cole still impressed the fans.  He is the future of the pitching staff, and based on tonight, when he certainly wasn’t perfect was overwhelmingly effective, there is a lot to look forward to if you’re a baseball fan in Pittsburgh.

The Pirates and Giants will match up again tomorrow evening at PNC Park for the second game of the series.  Barry Zito will take the mound for San Fran vs. Francisco Liriano for the Bucs.