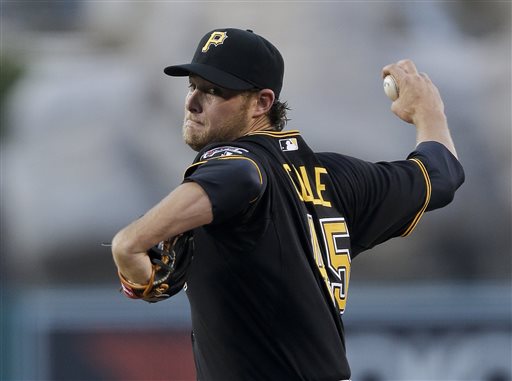 Gerrit Cole was back home tonight as he made his first road start against the Los Angeles Angels and he sure did impress the friends and family in attendance.  For Cole this may have been his most impressive outing of the three he has had this season.  He left after pitching 6.1 innings allowing two runs on four hits while striking out five and walking one.  The walk would be the first of his young career and before that he gave up his first home run, which came off the bat of Albert Pujols.

The two runs that Cole gave up did not factor into the outcome of the game, because the Pittsburgh Pirates offense struck early to give him the run support he needed.  Pedro Alvarez continued to swing a hot bat as he hit a solo home run in the second to begin the scoring for the Buccos.  Later in that inning with a runner on, Jordy Mercer joined the hit parade with a two run homer to left field that proved to be the game winning run.

Starling Marte collected an RBI on a triple in the fourth that was aided by Angels centerfielder Peter Bourjos losing the ball in the sky as it transitioned to night.  Andrew McCutchen added an insurance run in the ninth when he doubled home Mercer.

The bullpen was on lockdown once again.  Vin Mazzaro pitched 1.2 innings striking out a batter and picking up his fourth hold of the year.  With a three run lead Jason Grilli had a chance to redeem himself after blowing his first save of the year on Wednesday night.  Grilli did not disappoint as he would strike out two of the three batters he faced, while picking up save number twenty six on the season.

While Los Angeles has not played well this year, they still have a formidable lineup that can score runs in a hurry.  Winning tonight sets the Pirates up for another successful series as they have the edge in pitching over the course of these final two games.  It will be another late night contest between these two teams as they will play again tomorrow night at 10:05pm