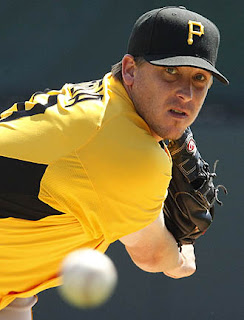 The Pirates lost today against the Tampa Bay Rays 4-3, falling to 3-6 in Grapefruit League play, and despite managing only four hits, there were a few strong positives to take away from this afternoon’s action.
Kevin Correia made the start for the Bucs today, and pitched three solid innings, giving up just two hits throughout.  Similar to last season, Correia looks strong early, and hopefully he can covert this over to the regular season.  Starting pitching will be a MAJOR factor in the potential success of the Pirates, Correia will be a major part of that rotation.
Justin Wilson and Doug Slaten had rough afternoons, each giving up two runs.  Slaten, in particular, struggled mightily, surrendering the pair of runs on three hits without recording a single out.  On a brighter note, though, Bryan Morris, Daniel Moskos, and Jared Hughes pitched well, tossing a scoreless inning a piece.  Slaten and Wilson, along with Tony Watson, have dug themselves an early hole in the battle for those few available spots in the bullpen.  There’s still plenty of games remaining for these guys to turn things around in Spring Training, but early on, I’d have to imagine they’re among those beginning the season in the minor leagues.
The Pirates’ players struggled at the plate today, managing only four total hits as a team.  Neil Walker made his return to the lineup this afternoon, going 0-3, while Garrett Jones and Jose Tabata also had hitless games.
Pedro Alvarez blasted a homerun in the fifth inning.  It was his second homerun hit this spring, and his swing looks pretty good thus far.  It’s easy to compliment a guy’s swing on the day he hits a homerun, but he has looked more comfortable and confident at the plate so far this spring.  Let’s hope he continues to build off this limited early success as we approach Opening Day.
Andrew McCutchen, Alex Presley, and Jake Fox had the other hits for the Pirates this afternoon.
The Bucs will host the Philadelphia Phillies tomorrow afternoon at 1:05pm.
Grapefruit Record:  3-6
And…
As Always…
Let’s Go Bucs!