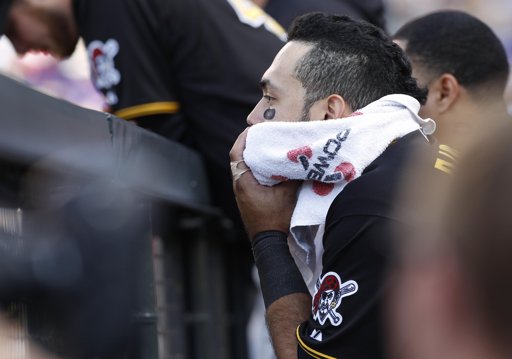 The Pittsburgh Pirates have not needed a day off this bad so far this season.  That is what they will get tomorrow after losing 3-2 today and getting swept by the Colorado Rockies.  This series was ugly from the start and only got more frustrating this afternoon.

Today’s game actually started out well for the Buccos.  Pedro Alvarez hit a solo homer to deep right center to put Pittsburgh on top 1-0.  In the third inning, Andrew McCutchen would hit a bloop infield single the brought in the second run of the game.

Jeff Locke started the game for the Pirates and while not to his pre All-Star break level, he was effective over the 5.2 innings he would pitch.  The four walks were a bit high compared to three strikeouts, but the one earned run he allowed kept his team in the game.  In fact he still had a no hitter going when Colorado scored their first run.  After hitting Charlie Blackmon, Blackmon would steal second with one out.  This is when the first error of the game would cost the Buccos.

Blackmon would try to steal third, but was clearly thrown out at third by Locke.  However the home plate umpire did not see Locke step off the rubber before throwing to third.  This led to a balk being called and the runner being safe at third.  Blackmon would then score on a sac fly to center.

Error number two of the day came in the sixth and allowed the Rockies to tie the game.  With two outs and runners at first and second, Chris Dickerson would hit a groundball in the area of short, Alvarez ranged over to make what looked like a routine play, but instead airmailed the ball allowing a run to score.

Colorado would take the lead in the seventh, but Pittsburgh had a chance in the ninth to tie the game up, enter error part III.  After Neil Walker led the inning off with a single, Tony Sanchez would double to right centerfield with one out.  Instead of sending Walker home and forcing the Rockies to make a play at the plate, third base coach Nick Leyva held him at third.  With this teams offensive struggles why would you do that?  Well Walker would advance no farther, because Jordy Mercer would line out to third and be followed by a fly out by Alex Presley.

Overall this was a bad game and terrible series.  Not the way you want to enter a three game series with the St. Louis Cardinals while holding a three game lead in the division.  Even after all this, I am not ready to throw in the towel on the season.  It was only one series and this off day could not have come at a better time.  Let’s hope a nice flight and peaceful Monday will have the Pirates relaxed and ready to battle come Tuesday night.