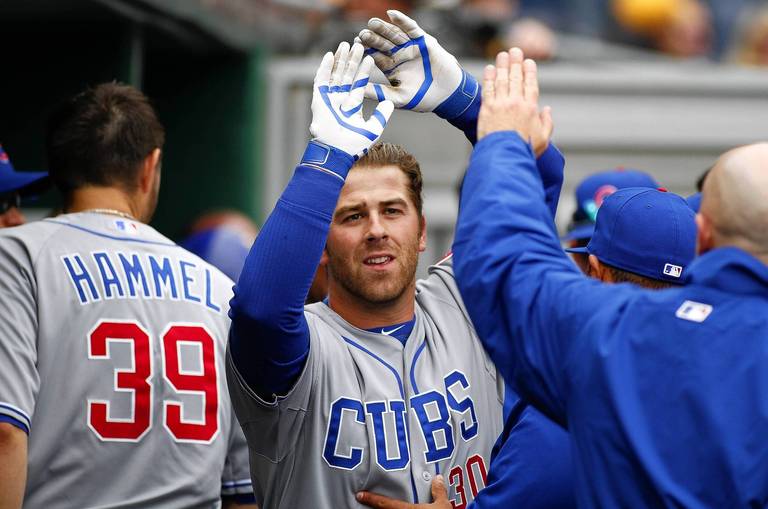 It has been a crazy beginning to the season for the 2014 Pittsburgh Pirates.  After a 10-inning game capped by a walk-off homerun by Neil Walker on Opening Day, the Bucs earned their second win of the season last night (early this morning) on an RBI single by Tony Sanchez in the 16th inning.

Unfortunately, the late game heroics would fall short for the Pirates, who fell to the Chicago Cubs in the series finale, 3-2, at PNC Park.

Wandy Rodriguez took the loss for the Pirates after a slow start, giving up three runs in the first three innings.  His mound opponent, Jason Hammel, held the Bucs’ offense in check throughout the afternoon, equalling the impressive starts by his teammates earlier in the week.

The Cubs got off to a hot start this afternoon against Rodriguez and the Buccos in the first inning.  Anthony Rizzo’s RBI single scored Emilio Bonifacio, who continued his hot streak with two more hits, giving the Cubs an early 1-0 lead.

Chicago added a run in the second on a leadoff solo homerun by Mike Olt, and tacked on another in the third to take a commanding 3-0 lead against a struggling Pirates’ offense.

Wandy settled in a bit in the latter part of his start, but at that point, the damage was already done.  He gave up three runs on five hits with one walk and five strikeouts in six innings, falling to 0-1 on the season.  Edinson Volquez, who is scheduled to start Sunday, pitched two scoreless innings and Bryan Morris pitched a scoreless ninth in relief.

The Bucs got on the board in the seventh inning, making the game much more interesting.  Walker earned a two-out walk, and advanced to third on a pinch hit double by Gaby Sanchez.  Tony Sanchez’s two run single scored Walker and Gaby, bringing the Pirates to within a single run.

Unfortunately, that was as close as the Bucs would get for the rest of the game.  Despite getting runners on base in both the eighth and ninth innings, they weren’t able to push that tying run across the plate, losing to the Cubs and missing out on a series sweep to open up the 2014 season.

This was a difficult loss for the Pirates today, and a tough series to watch if you’re a fan of offensive baseball.  The Bucs scored just seven runs in the three games combined.  As a whole, the offense has struggled immensely in the first few games of the season, and this is something that will need to improve itself immediately if they’re going to fare well this weekend against the high-scoring St. Louis Cardinals.

The Bucs will “welcome” the Red Birds into Pittsburgh for a three game series beginning tomorrow evening.  First pitch is slated for 7:05pm.