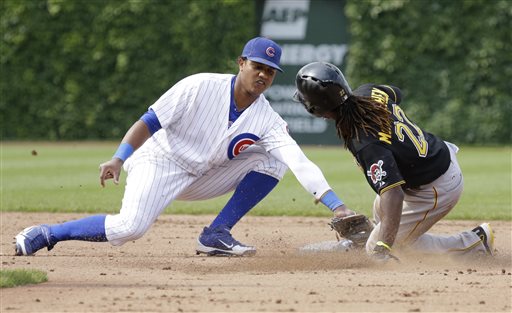 The Pittsburgh Pirates had a great opportunity to finish off this three game series today with another win against the Chicago Cubs.  On paper the pitching matchup of Jeff Locke against Edwin Jackson favored the Buccos, but the offense was unable to collect more than a run and the bullpen gave up the game winning homer to cap the Chicago victory 4-1.

Locke was inconsistent all day on the mound during his 5.2 innings on the mound today, which is odd considering he had a no hitter going into that fifth inning.  When he was lifted from the game, he gave up one run on one hit while striking out six and walking seven.  After walking two batters Scott Hairston hit a sacrifice fly to tie the game at one in the sixth.

The Pirates scored their only run in the fourth inning on a Garrett Jones single that scored Andrew McCutchen.  Justin Wilson took over for Locke to close out the sixth inning, but got into trouble in the seventh.  He would allow three runs on four hits, the biggest being a three run homer to Cody Ransom that would put the game out of reach for Pittsburgh.

The Pirates collected six hits today, but got no offensive support from Travis Snider, Russell Martin, Pedro Alvarez, and Neil Walker.  Even though Chicago is not a very good team, when you do not capitalize on the opportunities that appear before you, one swing of the bat can cost you the game.

The Buccos have a day off tomorrow before returning to PNC Park for a three game series with the San Francisco Giants.  Tuesday night will mark the Major League debut for former number one pick Garrett Cole.