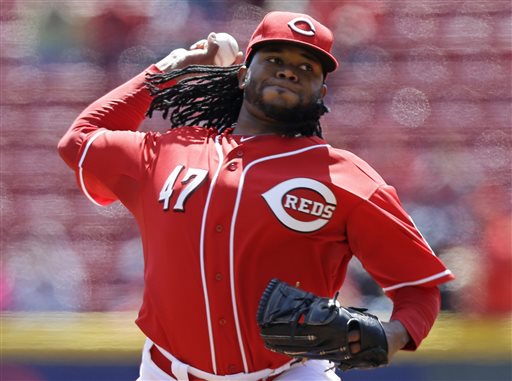 The Pittsburgh Pirates and Cincinnati Reds combined to score 27 runs in the first two games of their series at Great American Ballpark this week.  This afternoon, however, in the rubber match of the three-game set, runs were at a premium, and unfortunately for the Bucs, all four runs scored today were from the home team.

Johnny Cueto threw a complete game shutout, and Joey Votto’s two run homerun in the seventh inning helped put the game away, as the Reds beat the Pirates, 4-0, to take the first series between the two N.L. Central teams of the season.

Cueto, in his first start against Pittsburgh since last year’s N.L. wild card game, was masterful, giving up just three runs and striking out twelve, lowering his ERA to 1.50 while earning his first victory of the season.  His on-mound opponent, Francisco Liriano, battled his way through seven innings, giving up three runs on six hits with three walks and seven strikeouts.  After today, his ERA sits at 3.96, falling to 0-3 on the season.

The Reds took the lead in the first inning without tallying a single hit off of Liriano.  Billy Hamilton led off with a walk, stole second, and advanced to third on a wild pitch.  After Votto drew a walk, Liriano threw his second wild pitch of the inning to Brandon Phillips, allowing Hamilton to score, giving the Reds a 1-0 lead.

The score would remain 1-0 until the bottom of the seventh inning.  Cueto got things started with a one out single, and after Hamilton grounded into a fielder’s choice, Votto hammered a two run homerun to put the Reds up 3-0.  They’d add another run in the eighth just for good measure, which was already more than enough insurance, especially the way their starter was pitching today.

This was another difficult loss for the Pirates.  After scoring a combined 13 runs in the first two games of the series, the Bucs tallied a total of just three hits today – a double by Andrew McCutchen, a single by Tony Sanchez, and a single by Jordy Mercer.  They have followed up wins in their first three series to open the season by losing the last two, going just 1-5.

The Pirates will be more than happy to return home to Pittsburgh for a four-game series against the Milwaukee Brewers at PNC Park.  First pitch tomorrow is scheduled for 7:05pm.