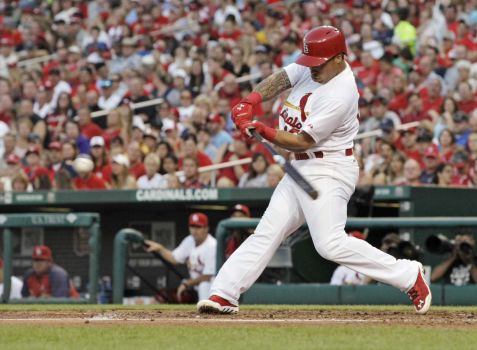 It’s pretty incredible how quickly things can change in Major League Baseball.  The Pittsburgh Pirates were playing like one of the best teams in the league a few days ago, and now, following a 5-2 loss to the St. Louis Cardinals tonight at Busch Stadium, the Bucs have dropped three in a row and are suddenly reeling and fading back towards the .500 mark.

Pirates’ starter Brandon Cumpton did not pitch well tonight, and, despite being tagged for four runs on nine hits, things could’ve actually been a lot worse.  Although he only lasted 3.1 innings, Cumpton’s line could have been even worse, as he was able to weasel his way out of a couple jams early in the game.  Still, he didn’t have his best stuff, and the Cardinals took advantage of it.

St. Louis took the lead in the first inning.  Matt Adams’ two run double scored Matt Carpenter and Matt Holliday to put the home team in front, 2-0.  Neil Walker cut the lead in half with a solo homerun in the second inning.

Jhonny Peralta’s RBI double in the third inning pushed the lead to 3-2.  After Jordy Mercer’s single scored Walker in the fourth to bring the Bucs within a run, the Cards answered right back in the bottom half of the inning.  Holliday singled home Lance Lynn, who reached base on a walk earlier in the inning.

Kolten Wong homered for the second time in as many nights in the seventh inning to give the Cards a bit of breathing room at 5-2.

This is just an incredible turn of events here in St. Louis for the Pirates.  Three days ago, this team was beaming with confidence and looked like one of the hottest teams in the league.  Now, after 27 innings of missed opportunities and walk off homeruns, they look lost and confused.  Entering this road trip, this was seen as a good test for the Pirates to see where they stood in the division.  So far, these are not the results we wanted or expected.

The Bucs will look to salvage a game in St. Louis tomorrow evening at Busch Stadium.  First pitch is scheduled for 7:15pm.