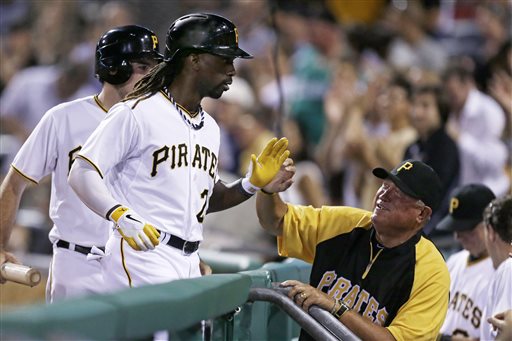 There has been a lot of talk lately on the struggle that has been the Pittsburgh Pirates offense and while I agree that they may need to shuffle things up a bit before the trading deadline, tonight the offense stayed the course and came through with patience and timely hits.  A.J. Burnett pitched quality innings and Andrew McCutchen drove in a pair of runs to lead the way for a 4-2 victory over the New York Mets.

While the offense showed life in the middle part of the game, one can not forget that the pitching staff held this game together.  Burnett took the hill to start the game and while it wasn’t his strongest outing, he kept the game close.  He would allow two runs on seven hits, while striking out eight and walking four batters.  New York scored their first run on a deep double by Kurt Nieuwenhuis in the fourth.  In the fifth they would take a 2-0 lead with a single by Marlon Byrd to short.

That would be all the offense the Mets could muster tonight, as the Pittsburgh bullpen would shut the door over the course of the next 3.1 innings.  Justin Wilson finished the sixth inning and worked a flawless seventh that bridged the gap to Mark Melancon in the eighth. With a two run lead, Jason Grilli picked up his 29th save of the year with a 1-2-3 inning.

Early on it looked like the Buccos offense would need a little time to get use to Mets starter Carlos Torres.  After four innings, Pittsburgh started to chip away at the New York lead.  Jordy Mercer would single home a run on a hit to shallow right.  In the sixth, McCutchen would tie the game when he hit a solo homer to centerfield.  Cutch struck again in the seventh when he singled the eventual go ahead run home.  After a Pedro Alvarez walk, Russell Martin would show plate patience and draw a bases loaded walk to add an insurance run.

It is funny how the game of baseball works.  Earlier this week things were in dire straits after the Pirates dropped three straight series, but now they have won three straight and have a shot at matching the 1971 Pirates with the most pre All-Star break wins in team history.  Gerritt Cole will start tomorrow to wrap up this series with New York.  First pitch is scheduled for 1:35pm.