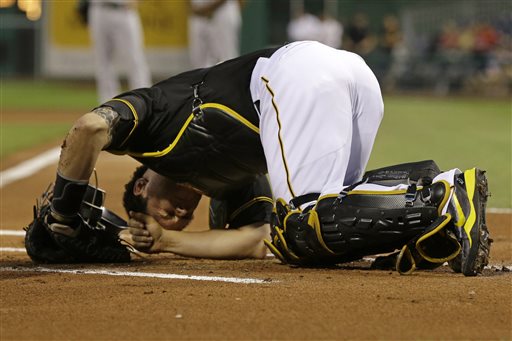 What has become of the Pittsburgh Pirates?  A week ago, they were the hottest team in baseball and fans were on cloud nine on what might be for the final three months of the season.  Now, that familiar “here we go again” feeling is starting to creep back into our heads.  Tonight’s loss to the Oakland Athletics proves that this team has offensive issues that clearly need to be fixed if they hope to avoid another epic meltdown.

The one good thing that has continued to shine during this offensive drought is the pitching staff.  That was at the fore front once again tonight with Gerrit Cole on the mound.  Cole had a rough start in the first inning as he would need to get out of a bases loaded jam, which he did with a strike out.  The only other time he had a rough patch would be in the fourth when former Bucco Brandon Moss hit a two run homer to give the A’s the only lead they would need for the night.

Cole left after the seventh and his final stat line of two runs on five hits with four K’s and two walks was definitely not loss worthy.  Tony Watson and Jason Grilli pitched flawless eighth and ninth innings to keep Pittsburgh in the game.

The only run that the Pirates happened to find tonight came courtesy of Pedro Alvarez.  Of course it was a solo shot which gave the Buccos a 1-0 in the second.  After that it would be zeros across the board.  This poor excuse of an offense was only able to muster three hits tonight and left four men on base.  Starling Marte and Jose Tabata were the other to players to record a hit.  The rest of the lineup went a combined 0-17.

At this point all I can think of to end this awful display of offense is to wear the home white jerseys.  The worst part is that it is the entire team that seems to be struggling right now and no one can come through with a big hit.  Pittsburgh will try to salvage a game in this series and snap its four game losing streak when they host Oakland tomorrow night at 7:05pm.