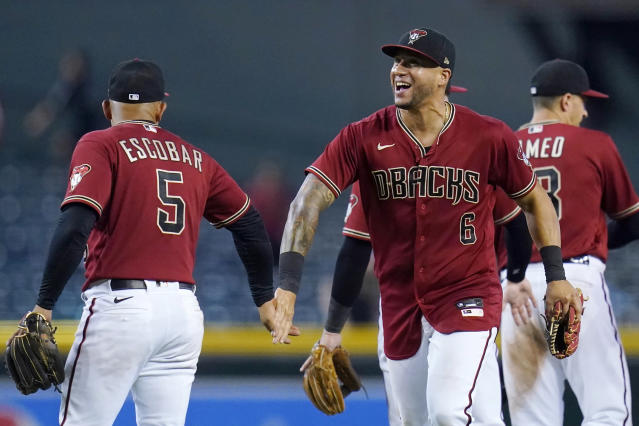 The Pittsburgh Pirates’ road woes continued on Wednesday afternoon, falling to the Arizona Diamondbacks by a 6-4 score at Chase Field.

The loss was the fourth straight for Pittsburgh, and also completed a series sweep by the D-backs.  The Pirates have a horrendous 15-34 record on the road and an overall mark of 36-60.

Max Kranick started for the Bucs, giving up four runs on seven hits in three innings.  His mound opponent, Madison Bumgarner, gave up three runs (one earned) on seven hits in five innings.  Neither starter was able to tally a decision with their respective performance on the bump.

The Pirates scored the game’s first run in the second inning.  A single by Jared Oliva scored Gregory Polanco to make it 1-0.  Arizona tied the game in the bottom of the inning on a RBI single by Bryan Holaday.  A double by David Peralta in the third inning scored Josh Rojas to make it 2-1.

Pittsburgh scored two runs in the top of the fourth, with a little help from the ineptitude of the Arizona defense.  Oliva reached on Eduardo Escobar’s error, allowing Jacob Stallings and Kevin Newman.  The Bucs’ 3-2 lead would not last for long unfortunately.

A two-run double by Nick Ahmed tied the game, and a bases loaded walk later in the frame gave the D-backs a 4-3 lead after four innings.

A bases loaded walk to John Nogowski in the seventh inning tied the game, but the Bucs couldn’t cash in any further to take the lead.  That would come back to haunt them, as Arizona scored two runs in the bottom of the frame which would end up being the difference.  Solo homeruns by Pavin Smith and Daulton Varsho made it a 6-4 score, which would be the final.

This was an extremely disappointing performance by this Pirates’ team on the road.  The Diamondbacks are one of the worst teams in baseball, and for the Bucs to be swept by a team with only 30 wins on the season is a dreadful result.

After a day off on Thursday, the Pirates will return to action against one of the game’s very best, the San Francisco Giants, on Friday.