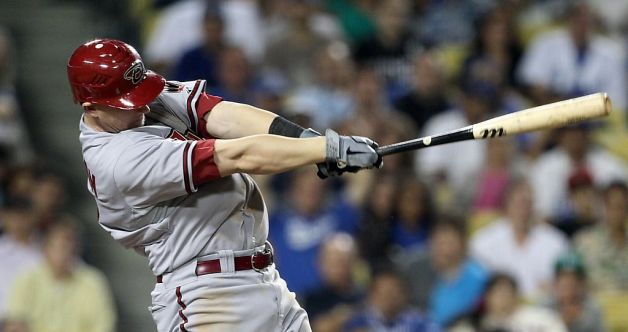 Entering tonight’s action at PNC Park against the Arizona Diamondbacks, the Pittsburgh Pirates held a 53-0 record when leading the game after the seventh inning.  So when Neil Walker’s sacrifice fly scored Travis Snider to give the Bucs a 4-3 lead, it seemed like a forgone conclusion that they would finish this game up cleanly and easily.  Right?

The Diamondbacks scored four runs on four hits off Jason Grilli, highlighted by a three-run back-breaking homerun by Chris Johnson, on their way to a 7-4 victory over our Buccos.  For Grilli, it was the only time this season that he hasn’t made at least one out in an appearance.

Johnson belted another homerun, this one a two run shot, as part of a three run ninth to add insult to injury, breaking the game wide open.

Jeff Karstens struggled tonight, but he did manage to get out of a few jams throughout his start, including the second and third innings, when the D-Backs left a total of three runners on base.  Overall, Karstens gave up three runs on eight hits through his six innings of work.  Tony Watson pitched a perfect seventh, while Chris Resop, coming in to relieve Grilli, pitched a scoreless frame to end the eighth.

Offensively, the Pirates thought they had done enough, scoring four runs through the game’s first seven innings.  Snider led the team with three hits, while Andrew McCutchen had two hits and two RBI’s, and Starling Marte had a pair as well, including a solo homerun in the seventh.  That being said, though, they had many more chances to score more runs early in the game.  They had the bases loaded in the fifth, two runners on in the sixth, and left another pair on in the seventh.  Overall, as a team, the Pirates left 12 runners on base.

The Diamondbacks have one of the more explosive offenses in the National League this season, which made their performance against Erik Bedard last night that much more surprising.  They certainly hit the ball much better tonight, in particular against the Bucs’ bullpen, tallying a total of 15 hits.  After their 10 run performance, including seven off of the relievers, they’ve tied the series at a game a piece with our Buccos.

The Pirates will try to get back on the winning side of things tomorrow night at PNC Park.  Kevin Correia will make a spot start for the Bucs against Arizona’s Ian Kennedy.  First pitch is scheduled for 7:05pm.