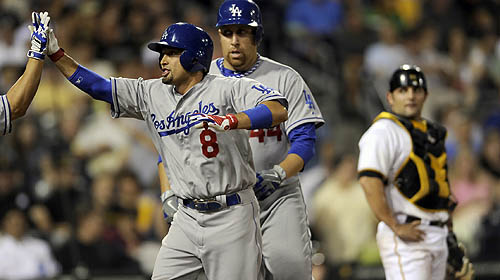 There’s no denying that this week is one of the biggest (and toughest) tests of the season thus far for the Pirates, facing two teams that are chasing them in the N.L. Wild Card race.  Based on the close records of the two teams and where the two clubs are in terms of standings and playoff positioning, it was expected to be an intense series…and that’s exactly what it was in the opening game between the Dodgers and Bucs at PNC Park tonight.

Shane Victorino, acquired from the Philadelphia Phillies at the trade deadline, went 2-4 with a homerun and three RBI’s, leading the Dodgers past the Pirates, 5-4 in a back-and-forth game on the North Shore.

Juan Rivera’s pinch-hit single in the eighth increased the lead to 5-2 at the time, and ended up being the difference in the game tonight.  Matt Kemp also had an RBI single as part of a two-run third inning.

Jeff Karstens was tagged with the loss, his third of the season, giving up four runs on seven hits through seven innings, while Juan Cruz, Tony Watson, and Jason Grilli combined to pitch two scoreless innings.  Karstens battled through a couple tough stretches, and despite giving up a handful of runs, he pitched well enough to earn a victory tonight.

Offensively, it was all about Garrett Jones tonight.  The Pirates right fielder went 4-4 with two doubles, two singles, and three RBI’s.  Michael McKenry added an RBI single in the eighth inning, while Starling Marte and Andrew McCutchen each had an infield single.

This was a hard-fought game by two quality ball clubs, and the Pirates came up just short.  The most troubling aspect of tonight’s game was that it was another loss at PNC Park, where the Bucs have fallen to 3-5 on this home stand.  They are in the midst of their longest home stand of the season, and things have not turned out the way the Pirates and their fans thought, and hoped.  With the loss, the Pirates are now five games behind the N.L. central division leading Cincinnati Reds.

The Bucs will look to get back on the winning side of things tomorrow evening on the North Shore against the Dodgers.  Kevin Correia will make the start for the Bucs against Chad Billingsley for Los Angeles.  First pitch is scheduled for 7:05pm.