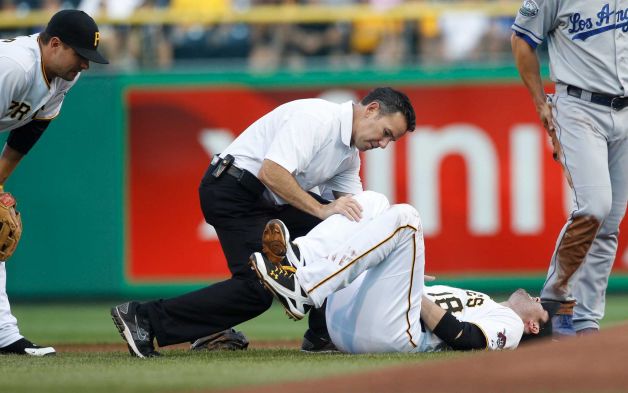 After last night’s 11-0 loss to the Dodgers, the Pirates and their fans couldn’t have imagined things getting much worse.  They made mistakes and mental errors in the field and at the plate, while L.A. got every bounce, roll and call possible on their way to a rout shutout at PNC Park.  There’s no way it could get any worse than last night…right?

Despite the ups and downs of the 2012 season thus far, the one thing the Pirates had been able to avoid was injuries…until tonight.  Neil Walker left tonight’s game with a dislocated finger on his right hand.  After fielding a Matt Kemp ground ball, Neil ran to force out Mark Ellis at second base and throwing on to first base for the double play, but landed awkwardly on his forearm and immediately writhed in pain.  There has been no official word on how long he’ll be out of the lineup, but this certainly doesn’t bode well for a team that has been struggling offensively as of late.

As for the game itself, it was another one to forget for the Pirates tonight at PNC Park, as the red-hot Dodgers continued their onslaught of the home team in the third of this four game series, slowly dismantling the Bucs’ pitching staff inning by inning on their way to a 9-3 victory.  Wandy Rodriguez gave up five runs on ten hits through 5.2 innings, while Chris Resop surrendered four runs on four hits in relief.  Four Dodgers’ players had multi-hit games, including Shane Victorino and Andre Ethier who had three hits each.  Matt Kemp led L.A.with 3 RBI’s on the night.

Offensively, we knew things would be a struggle for the Bucs tonight, facing off against Dodgers’ ace Clayton Kershaw.  He certainly wasn’t at his very best tonight, giving up three runs on six hits through eight innings of work, but he limited the damage and never faced any serious pressure as his offense had distanced themselves from the Bucs by the fourth inning.  Andrew McCutchen hit his first homerun in nearly a month for the Pirates, while Gaby Sanchez smacked a pair of doubles and Clint Barmes had a pair of singles and an RBI.  Garrett Jones had the other RBI with a sacrifice fly in the second.

It’s clear that these two teams have very similar records at this point, but they are going in two completely different directions.  The Dodgers have won nine of twelve games, while the Pirates have lost seven of nine. L.A.has won twelve of the last thirteen against the Bucs, including nine in a row.  They have outscored the Pirates 25-7 thus far in this series.  Things are really shaping up for the Dodgers, as their main competition for the N.L. West title, the San Francisco Giants, were dealt a heavy blow today with the 50 game suspension of Melky Cabrera.

Things are in flux right now for the Pirates.  Roster changes could be on the way inPittsburgh, considering the injury to Walker, the continued hindering of Travis Snider, and the struggles of a number of position players at this point.  As stated numerous times throughout the day from a number of people in the Pirates’ organization, the next several starts are a tryout for the pitching staff.  Wandy Rodriguez simply hasn’t been good since coming to Pittsburgh.  He is 0-3 with a 5.47 ERA, with 12 strikeouts, eight walks, and four homeruns allowed since being traded from Houston.

The Bucs will try to avoid the four-game series sweep tomorrow afternoon at PNC Park, as A.J. Burnett will take the hill looking to snap the current skid and get things back on track.  Despite his disappointing outing against the San Diego Padres his last time out on the mound, there’s no one on the Pirates pitching staff that fans would rather have start tomorrow’s game than Burnett.  He’ll face off against the Dodgers’ Joe Blanton at the scheduled 4:05pm start.