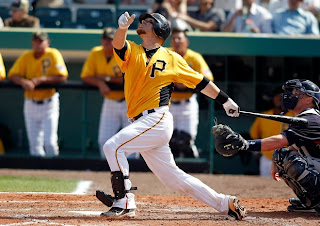 The Pirates and Rays matched up again today at McKechnie Field.  This was the seventh time the two clubs played of the spring, basically playing to a stalemate through the first six contests.
Paul Maholm took the hill for the Pirates today.  After being named the team’s starter for the home opener on April 7, as well as being plugged into the number two spot in the rotation, the left hander, manager Clint Hurdle, and Pirates’ fans were hoping he could have a solid performance today against .
As Pirates’ fans entering a season following one of the worst years in recent memory, it is realistic for us to hope that our starting pitchers can keep us in ballgames on a consistent basis.  That’s exactly what Paul Maholm did today.  While he certainly didn’t shut the Rays down, his kept his team in the game, giving up three runs on five hits through five innings.  Two of the five hits against Paul were homeruns, coming off the bats of Kelly Soppach and Ben Zobrist in the second and fifth innings respectively.
Joel Hanrahan had probably his best performance of the spring, pitching two innings of shutout ball, without even surrendering a hit, while striking out three batters.  It was nice to see our closer shut down an offense like he did today.
Chris Leroux, on the other hand, who is in the running for the final bullpen spot, certainly didn’t help his cause this afternoon.  After pitching well in the eighth inning, he gave up a game-tying solo homerun to the Rays’ John Jaso in the ninth.
After drawing a one-out walk against rays reliever Jeremy Hall and moving to second on Jose Tabata’s fielder’s choice groundout, Josh Rodriguez scored an unearned run on Daniel Mayora’s throwing error as the Pirates edged the Rays, 5-4.
Ryan Doumit was the hitting star of the day for the Buccos, with two hits and two RBI’s.  This is especially good news due to the fact that Chris Snyder’s nagging injury has been more persistent than what was initially expected.
Tabata and Neil Walker also chipped in two hits, while Andrew McCutchen had an RBI for the Pirates.
With the win, the Pirates improved their Spring Training record to 11-19, while the Rays fell to an even 14-14.
The Buccos will travel to to take on the Minnesota Twins tomorrow at 1:05pm ET.  This will be the final spring game in for the Pirates.  Jeff Karstens will make the start tomorrow afternoon.  Following the game, the team will travel to for their first of two final exhibition games this week before the start of the regular season.
And…
As Always…
Let’s Go Bucs!