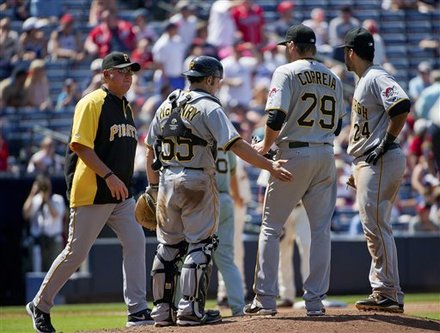 Well, there positives and negatives to the Pirates’ 4-3 loss to the Atlanta Braves this afternoon at Turner Field in the third game of the four game series.

It looks as though Jose Tabata and Pedro Alvarez are breaking out of some seriously bad starts to the 2012 season.  Tabata tallied three more hits today, including a two-run single in the first inning and a double in the ninth inning, raising his average to .231 on the year.  While the average is still not where we, the fans, would like it to be, he’s come a LONG way from where he was a week ago.  As for Alvarez, he’s looking more confident at the plate each game.  Pedro went 2-4 today with a run scored, bumping his season average up to .200 (gasp).  This was a huge series from a confidence standpoint for Alvarez, and hopes are that he will continue the trend this upcoming week and beyond.

Now the bad news…the defense!  The Bucs had two errors this afternoon, but both were incredibly costly to starter Kevin Correia.  And the two culprits were two of the most unlikely on the Pirates’ team:  Alvarez and Andrew McCutchen.  After building an early 2-0 lead, the Bucs gift-wrapped a comeback for the Braves, all sparked by Cutch’s two base error in the third inning on an apparently routine fly ball by Atlanta starting pitcher Tim Hudson.  Correia then walked Michael Bourne, and it was Pedro’s turn to falter, muffing a routine ground ball off the bat of Martin Prado.  Freddie Freeman hit a sac fly, putting the Braves on the board.

From the point, Correia’s afternoon would only go downhill.  Despite a strong start, he would only pitch 4.1 innings, giving up three runs (two earned) on four hits, while walking five batters.  He lost his first game of the season, while his ERA sits at 2.42 on the year.  Brad Lincoln gave up a run on two hits in his two innings of work, while Tony Watson and Evan Meek finished the seventh and eighth innings.

The Pirates, once again, failed to score five runs in a game.  Forget the record that everyone wants to talk so much about; they need to score more runs to win the game.  While Correia certainly wasn’t at his best this afternoon, he only allowed three runs, which shouldn’t be the death sentence that it appears to be for this offense.  While it’s nice to see Alvarez and Tabata, as well as Neil Walker, start to heat up at the plate, we’re also seeing the simultaneous struggles of Rod Barajas and Clint Barmes.  And Andrew McCutchen, after what has been a tough series in Atlanta thus far, might need a day off for the first time in 2012.

Pittsburgh will look to earn the split with the Braves tomorrow night at Turner Field.  James McDonald will take the ball for the Bucs against Atlanta’s Mike Minor.  First pitch is slated for 7:10pm.