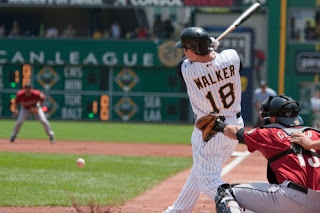 In a recent column posted yesterday, ESPN’s Jayson Stark revealed his lack of interest, and apparently his lack of knowledge, in the Pittsburgh Pirates’ organization.  In the category listed as “Least Recognizable Team,” here is what Mr. Stark had to say about our beloved Buccos:
“I might as well retire this category. What’s the point? The Pirates seem to win it every year, anyway. Here’s how I know exactly how faceless this team is: I cover baseball for a living. I kept a daily log book on every team’s transactions all winter. And even I couldn’t correctly identify the Pirates’ entire prospective Opening Day lineup this week. So there’s no telling how much money you could win if you walked into any tavern not located in the 412 area code and challenged your buddies to do it — even if you gave them Andrew McCutchen and Pedro Alvarez free of charge. It’s not a good sign when more Americans can name the lineup of the 1979 Pirates than the 2011 Pirates. But I’m betting that if I commissioned a poll, that’s exactly how it would turn out.”
First of all, I am personally amazed that Mr. Stark is willing to admit that he isn’t able to do his job.  As he describes above, he covers baseball for a living.  How is he not able to identify the Pirates’ roster?  Above anything else, the answer to this question is that he’s not interested in what the Pirates are doing in the offseason.  At numerous times throughout his recent columns, he has drawn comparisons between the Red Sox and Yankees to clubs like the Pirates.  It doesn’t take an ESPN “expert” to realize that these organizations are in completely different situations, both on and off the field.
Furthermore, he mentions that other than Andrew McCutchen and Pedro Alvarez, the rest of the lineup is unrecognizable.  This team lost 105 games last year and hasn’t had a winning season in nearly two decades.  Given those facts, from a national standpoint, the lineup shouldn’t be the same as past years.  Clearly, changes need to be made, and they have been, little by little, year after year.
I hope the Pirates’ management and players read these types of articles.  While most of the time, it is never recommended for players and coaches to pay attention to what they read/hear in the media, I don’t think this applies to the Pirates, given the current situation.  The bottom line is, people don’t recognize the Buccos because they’re not winning.  If the team is still in contention in the N.L. Central by June and July, this lineup will become much more recognizable, and not only the names of Alvarez and McCutchen.
While articles like this are difficult to read, we can’t say they are totally underserved.  The only way to end these types of comments is to be competitive deep into the season and to make vast improvements from last year.  While the core group is there, it will take leadership from new manager Clint Hurdle as well as the veteran members of the club as well as considerate player improvement.  And it wouldn’t be surprising at all if Jayson Stark has his own section on the Pirates’ bulletin board on Opening Day.
And…
As Always…
Let’s Go Bucs!