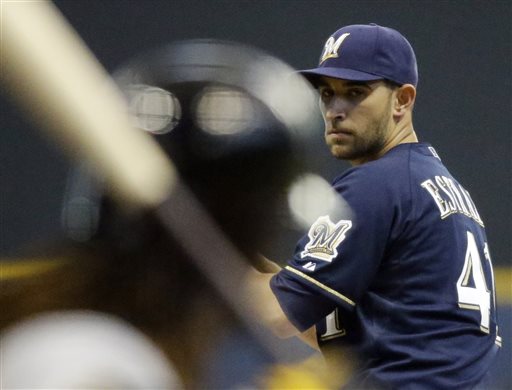 As all Pittsburgh Pirates fans know, Miller Park has been a difficult place to play.  Traditionally, offenses have dominated the games played in Milwaukee.  Tonight, though, the pitching staffs had control of the game, and the Milwaukee Brewers were just a tad better than the Bucs as they took the first game of the weekend series, 2-1.

Marco Estrada and A.J. Burnett faced off in what was an enticing matchup on paper, and it was even better on the field.  Estrada pitched seven innings, giving up one run on four hits, while Burnett surrendered two runs on three hits in his seven innings of work, taking the loss in the process (3-5).

The Brewers took the lead in the second inning.  After Aramis Ramirez led off with a walk and Carlos Gomez doubled to right, Alex Gonzalez doubled to center, scoring two runs and giving Milwaukee the early advantage over Burnett and the Bucs.

Estrada pitched well tonight, setting the first 14 batters down in order to begin the game.  Other than a Neil Walker bloop single, the Brewers’ starter was perfect through the first five innings.

The Pirates’ first chance to score came in the sixth inning on a two-out triple by Starling Marte.  Unfortunately, though, they wouldn’t be able to capitalize, as Estrada struck out Travis Snider to end the threat.

Gaby Sanchez go things started in the seventh inning with a one-out single off Estrada.  But rather than squander the opportunity like they did the inning before, the Pirates cashed in.  After Russell Martin hit into a fielder’s choice, Walker’s RBI double brought in the Bucs’ first run of the game, cutting the lead in half.  The Pirates wouldn’t get any closer.

This was a tough loss for the Pirates, mainly because they got a strong start from their pitcher against an offense that has done a lot of damage this season.  Unfortunately, they weren’t able to take advantage of this strong pitching performance, and will now try to even the series tomorrow afternoon at Miller Park.  Jeff Locke will start for Pittsburgh.