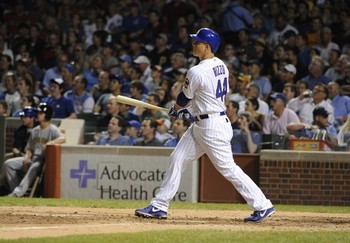 The Pittsburgh Pirates were embarrassed tonight by the Chicago Cubs in a 14-4 defeat, plain and simple.  A nine run fifth inning by Chicago ended any chance the Buccos had of making a comeback, considering they were down two when the inning started.

Erik Bedard was lit up tonight.  He would go 4.1 innings allowing eight earned runs on seven hits, while striking out seven and walking two.  Even the bullpen had a rough night, Chris Resop came in and got rocked as well allowing four runs on four hits, but did collect the final two outs of the inning.  Tony Watson gave up another run over two innings of work, while Jared Hughes worked his way out of the eighth without a scratch.

The offense didn’t do that much tonight either.  Starling Marte had an RBI single in the third, and Pittsburgh actually had the lead in the fourth when Michael McKenry grounded into a double play that scored Andrew McCutchen.

Two meaningless runs scored in the sixth.  The first on a McKenry single that brought home Garrett Jones, and the second on a Clint Barmes walk with the bases loaded.  Marte had the best night at the plate of any Bucco, as he went 3-4.

So what do we take from this game.  Well from this game, nothing.  This is a game you throw away and move on.  There are not any teaching points, because everything went wrong for Pittsburgh.  The bigger question is what the Pirates need to do to correct the problems of the past week.  At this time last week the Pirates started a ten game stretch against the worst and fourth worst teams in the National League.  They are now 4-4 eight games into that stretch, while falling three games back of the Cincinnati Reds in the division and losing the top Wild Card spot to the Atlanta Braves.

There is no time to wait on things getting better.  Pittsburgh needs to make a statement these next two games by winning them, that’s right these next two games are must wins for the Pirates.  A.J. Burnett will start tomorrow night, while the Cubs have Ryan Dempster scheduled to pitch.  The trade deadline is at 4:00 tomorrow so we won’t be certain about Dempster until that time.  First pitch is scheduled for 8:05.