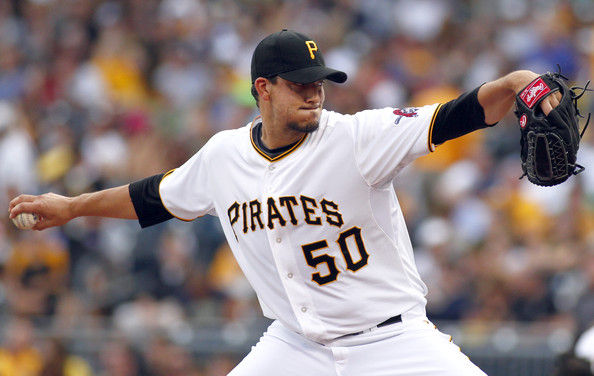 The Pirates signing of right hander Juan Nicasio on Thursday brought some more depth to their bullpen for 2016.  With rumors swirling at the Winter Meetings surrounding closer Mark Melancon, Nicasio joins the late inning group of Tony Watson and Arquimedes Caminero.  He had a solid season for the Dodgers last year, despite being non-tendered in early December.  He had a 3.86 ERA but did struggle with his control.  He tallied a 10 K/9 inning rate to a 4.9BB/9 inning rate along with a 43% ground ball rate in just over 58 innings.

Early this morning, the Pirates traded Charlie Morton to the Philadelphia Phillies for right hander David Whitehead.  The Phillies are picking up the tab for Morton, which includes $8 million in 2016 and a $9.5 million mutual option in 2017.  Whitehead pitched High-A ball last season, slating a 4.44 ERA with 6.24 K/9 inning in 25 starts.  Make no mistake, though, while the Pirates have claimed they like Whitehead, this move was all about the money and clearing Morton’s salary.

With the decisions to part ways with Pedro Alvarez, Walker, and now Morton, the Pirates are making room for acquisitions to address their areas of need – first base and pitching.  With their payroll currently at about $88 million and with a target of about $105 million, they clearly have room to make necessary moves.  As Neal Huntington shared, “A big part of the motivation was to free some dollars to allow us to deepen the club, to re-establish some depth.”

Now, more than ever, the pressure is on the Huntington to make things happen.  They are still in need of another arm, as the rotation currently features Gerrit Cole, Francisco Liriano, Niese, and Jeff Locke…and while it hasn’t happened yet, it wouldn’t be a huge shock if Locke was not a part of this team for much longer.  Tyler Glasnow will not be ready for the beginning of the season, furthering the notion that a new name will be on the Pirates roster before Opening Day.  That being said, inside sources have hinted that names like Scott Kazmir and Mike Leake are out of the Pirates reach.  Who will they go after?  Justin Masterson?  Kyle Kendrick?  Only time will tell.

The other glaring issue is first base.  Will the Pirates look for a platoon partner for Mike Morse, or will they go after a full time starting first baseman?  Obviously, money will be an issue with any deal that is made, but something has to be done to serve as a bridge to when Josh Bell is ready for the Major Leagues.  Mike Napoli has come up in conversation as a player of interest, as did Mitch Moreland, although the talks of Moreland have cooled recently.  Regardless, this is still a key dynamic on where they Pirates will be headed this upcoming season.

Pittsburgh will undoubtedly be playing from behind even before the 2016 season begins, as the Chicago Cubs have moved as the popular pick to win the World Series.  By acquiring Jason Heyward, Ben Zobrist, and John Lackey, the Cubbies have improved any areas that were lacking from their 2015 team that advanced all the way to the National League Championship Series.

Meanwhile the Pirates, small market spenders in an increasingly and exceedingly overpaying market, will need to be creative if they are going to put a team on the field that can compete with their rivals in the Windy City.  The core of this team is intact, and with a few more strategic maneuvers, with the management team and coaching staff they have in the Black and Gold, there’s no reason to believe this team can’t contribute to the National League Central being the best in Major League Baseball for the second consecutive year.