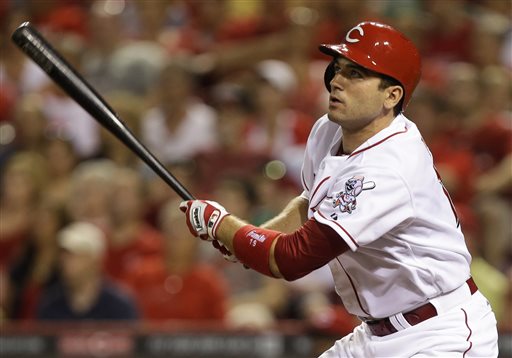 It may be mid-June, but tonight’s series opening game between the Pittsburgh Pirates and Cincinnati Reds had the feeling of late season playoff race.  There was top notch pitching, little offense, and magnified mistakes.  The Buccos saw four mistakes leave the yard as they fell victim to the Red Legs 4-1.

Francisco Liriano had a pretty good night pitching as he lasted six innings allowing two runs on five hits while striking out six and walking two.  The first of those two runs came in the fourth inning when Zack Cozart hit a homer to left field.  The sixth inning would see Todd Frazier leave the yard to put Cincinnati up for good.

The only time Pittsburgh was able to get to Reds starter Mike Leake, was in the top of the sixth.  Andrew McCutchen would reach on a fielder’s choice and then score two batters later on a Russell Martin double to right center field.  The only other highlight for the Buccos tonight came in the third inning when Starling Marte made a great diving catch to rob Brandon Phillips of a hit.  This catch is sure to be on the highlight reels for the next several days.

The Red Legs added some insurance runs in the eighth inning off of Pirates relief pitcher Bryan Morris.  The first came on a solo dinger to left from Joey Votto.  Jay Bruce decided to match that feat to cap the scoring in the game when he sent one over the wall himself.

We all know this series is going to be a test for the Buccos and tonight was not the start we were hoping for.  Needless to say, they have been able to bounce back in four game series after dropping the first game this season.  Game two of this series will take place tomorrow night with Charlie Morton making his second start of the year.