From The Fans In The Stands: PNC Park Memories 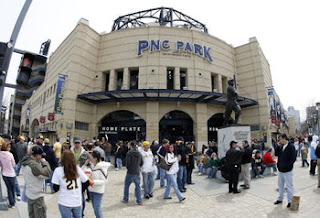 Hey Bucco fans!  A couple weeks ago, we gave away free tickets to this past Saturday’s game against the Washington Nationals at .  Fans emailed us here at Fans From The Stands telling us about their most memorable moments at .  Below are a couple of the stories we received from you fans out there!
“August 7, 2010:  The Pedro walk-off.  You already know what happened, the situation, and all that.  But here’s my story from that night:  It was probably as loud as has ever been/will ever be.  The place was literally ROCKING.  I could feel it shaking.  This, not to mention the George Thorogood and fireworks show afterwards.  The dude was hilarious.  Talking about the Pirates being the best franchise in pro sports, and even though he didn’t grow up a fan, he’s not a huge supporter of the Pirates, etc.  I could smell the alcohol on his breath.  He kept the place rocking though.  That whole night was amazing.  The fireworks were a letdown.  That’s how electric the place was.  Other than that, the only complaint I had on the night was that when they played Greg Brown and Steve Blass’s call of the homerun, I couldn’t hear it because of the insanity that was still taking place around me.  As soon as I got home, I was on a mission to find the audio and/or video.”
–
“My best memory of a Pirates’ game I attended at was on 6/28/04.  It was a 2-1 victory over the St. Louis Cardinals.  With one out in the bottom of the ninth inning and the score tied 1-1, Jack Wilson came up to bat.  He crushed the ball into the left field corner.  He had an easy double and the ball was thrown into second.  Albert Pujols, who did not see, was late getting to the second base bag so he continued on to third.  When Pujols caught the ball he had plenty of time to get , but his throw sailed on him and the Cardinals’ third baseman Scott Rolen was unable to catch the ball and it rolled towards the Pirates’ dugout.  The Pirates won the game 2-1.
-Mike
Have something to say?  Want to post something on the website?  Send us an email, message, article, or anything else you’d like to share Pirates-related at fansfromthestands@yahoo.com or comments@fansfromthestands.com.  Throughout the entire season, we’ll be posting comments and articles from you, the fans.  After all, that’s what this site is all about!  The Fans!