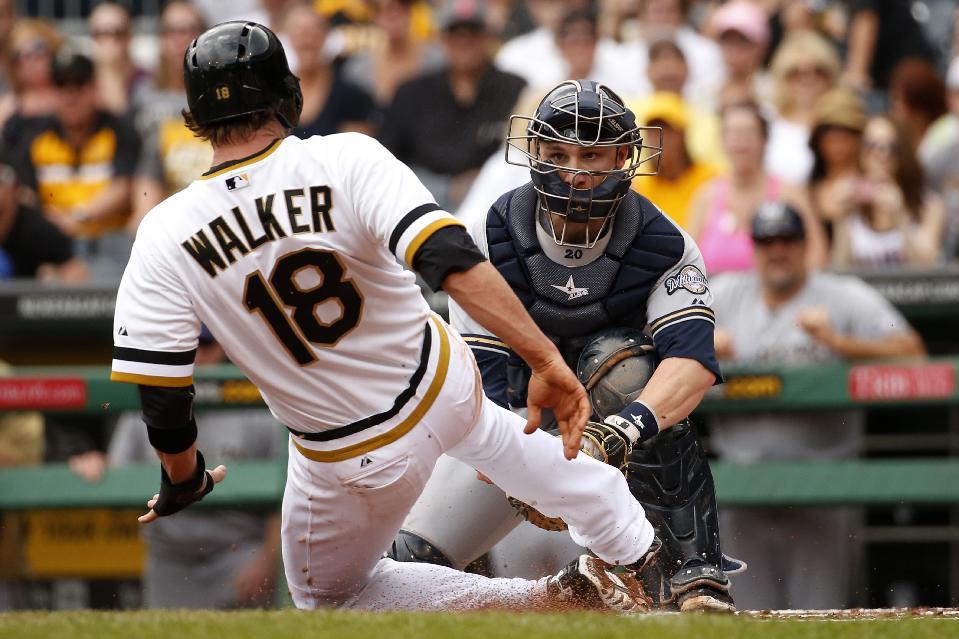 After the first two games of this series, it would have been easy to think that this would be another high scoring game to close out this series between the Pittsburgh Pirates and Milwaukee Brewers at PNC Park.  In the first two games a total of 32 runs were scored, this afternoon only one run would cross the plate.

Jeff Locke would be called up from AAA Indianapolis to make the start today after Gerrit Cole was placed on the 15-day DL with shoulder fatigue.  Locke was a lights out pitcher in the first half of last season, before the second half took a turn for the worse.  That bad finish caused him to start this season in the minors before making his second start in the bigs today.

Overall Locke pitched like a man on a mission today.  He allowed one run on three hits over the seven innings he worked today.  That lone run came in the seventh when Aramis Ramirez grounded out to first to score Jonathon Lucroy.  Lucroy reaced second base when a fan interferred with a ball hit down the third base line.  There was some controversey over whether he should have advanced to second because of him jogging to first to begin with.

Pittsburgh was unable to cash in on some opportunites this afternoon and they had some calls not go their way as well.  Neil Walker was thrown out at home in the first inning, even though replays showed that his foot touched the plate before the glove made the tag.  The Pirates then had the bases loaded with one out in the seventh.  They would not be able to score, as Jose Tabata would strike out and then Josh Harrison would pop out to first.

In the eighth inning, Andrew McCutchen would reach third base with two outs.  Russell Martin would be called out looking to end the inning.  The replay looked like the ball was low and inside.  Martin and manager Clint Hurdle would be thrown out for arguing the call.

The Pirates would have one more chance to win this game in the ninth inning.  With one out Starling Marte would walk and steal second on a reversed thrown out call.  Ike Davis would walk and then be lifted to be pinched run for by Clint Barmes.  A great play by Jean Segura would leave the Buccos with runners on first and third with two outs.  Josh Harrison came to the plate with a chance to be the hero, but he would fly out to center to end the game 1-0 in favor of the Brewers.

Tough game today and the Buccos could not catch a break.  They needed this series in order to gain ground in the division, but were unable to gain any ground after starting the series with a win Friday night.  They will now begin a four game series at home against the Chicago Cubs tomorrow night.