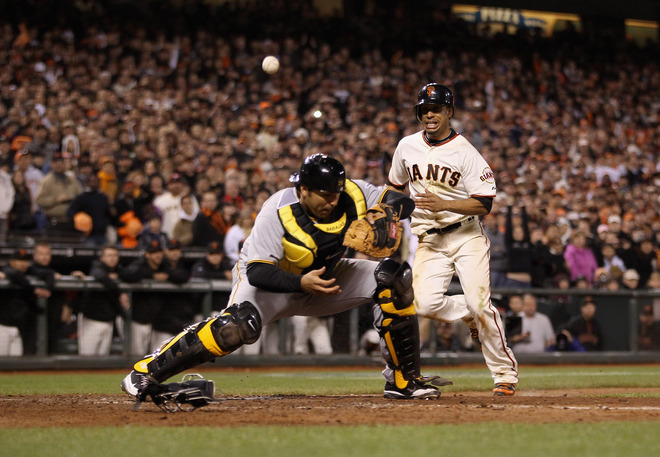 So far this road trip has been nothing short of utterly frustrating.  Follow a three-game series sweep by the Los Angeles Dodgers earlier this week, the Pirates lost yesterday to the San Francisco Giants in a game where they were only able to tally one hit as a team.

All that being said, tonight’s game might have been the most frustrating of all.  It was a horribly sloppy game by both sides.  While there were a few nice plays by both teams, overall, this was a game full of bad plays, featuring five errors, including one on Clint Barmes on a throw to home plate in the bottom of the ninth which clinched the game for the Giants.  It was a low throw, one that was possible to be caught, but Rod Barajas, unable to pick the ball and was perhaps already looking to take a shot at third base for the double play, couldn’t bring it in.  The end result was a Giants walk-off win, 4-3 at AT&T Park.

Tonight also marked the return of Charlie Morton to the Pirates’ starting rotation.  All things considered, Morton pitched a decent game.  He only lasted five innings, mainly because of the need of a pinch-hitter in a tie game in the sixth, but he kept the Bucs in the game, which has been the trend of all starting pitching performers thus far in 2012.  Morton gave up three runs on seven hits while walking two batters tonight.  Again, it was solid for a guy in his first professional start since injury, especially against a lineup full of left-handed batters.

Similarly, the bullpen was impressive tonight.  Tony Watson, though he was hit hard, only actually gave up one hit in the sixth inning, while Juan Cruz and Jason Grilli each pitched an inning of scoreless baseball.  Chris Resop gave up a pair of singles to lead off the ninth, and after intentionally walking Angel Pagan, got Melky Cabrera to hit a grounder to Barmes.  We already know the rest of that story.

And that takes us to the hitting.  Good news first.  Neil Walker finally got his bat going tonight with two hits, including a bases-loaded, two-out, two-run single in the first inning to give the Pirates an early lead.  In a year that has been full of hard contact but nothing to show for it, it was nice to see Walker finally get some balls to drop.  Hopefully this can get his bat hot, which will help a devastatingly absent offense.

Again it was another struggle for the offense as a whole, tallying just seven total hits.  Even worse than that, the team managed only four hits after the first inning.  In addition to Walker, Alex Presley, Andrew McCutchen, and Casey McGehee each had a hit a piece.  Still, it’s nowhere near enough to compete with big league clubs on a consistent basis.

Jose Tabata continues to struggle, going 0-4 on the night, dropping his early season average to .160.  Barajas and Barmes, two the new Bucs, were both hitless, dipping their averages to embarrassing totals of .050 and .087 respectively.  In a word, that’s pathetic.

The Pirates will try to avoid the sweep tomorrow while also looking for their first road win of the season.  They are 0-5 on their current west coast road trip, and will send Kevin Correia to the mound to face Ryan Vogelsong.  First pitch is scheduled for 4:05pm at AT&T Park.

To make room on the roster for Morton, the Bucs sent Matt Hague to Triple A Indianapolis.  The decision was between Josh Harrison, Yamaico Navarro, and Hague.

Check back here to FFTS tomorrow for another recap and more reactions to the Pirates’ series finale against the Giants.