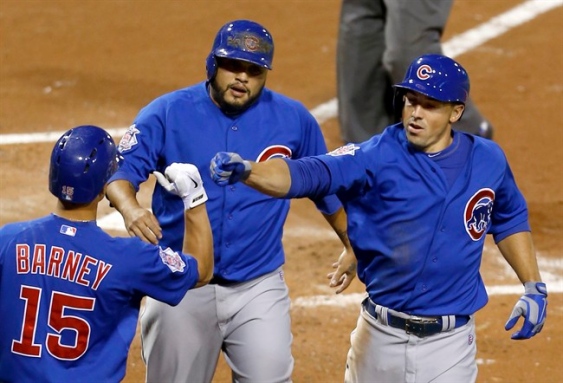 Tonight had some of the most exciting moments of the season for the Pittsburgh Pirates and their fans.  Unfortunately, the end result couldn’t have been more disappointing – a 5-4 loss to the Chicago Cubs in the second game of the four-game series.

Charlie Morton tossed five innings, giving up three runs on four hits.  He pitched well, but made a couple mistakes tonight…most evident was a two-run homerun to Brian Bogusevic in the fourth inning, putting the Cubs out in front 3-0.

The Pirates got on the board in a HUGE way in the fourth inning.  With two outs, Pedro Alvarez hammered a ball off the ball, ricocheting around enough to give the Bucs third baseman the time to race all the way around to score for an inside the park homerun, his 33rd round-tripper of the season.  Russell Martin followed that up with a homerun of his own, hitting the very next pitch over the left field wall.  And finally, Garrett Jones tied the game with a homerun to dead center field.  In the span of four pitches, the Bucs hit three homeruns and tied the game, 3-3.

In the sixth inning, Pittsburgh took the lead.  Andrew McCutchen led off a double off the center field wall.  With one out, Alvarez came to the plate and smacked a ground ball toward first base.  Pedro made it extremely close at first base…close enough that the pitcher covering the base dropped the ball.  Cutch advanced to third and, after seeing the ball drop, raced home to give the Pirates a 4-3 lead.

Unfortunately, the Cubs took the lead back in the 7th inning off Jason Grilli.  Anthony Rizzo crushed a two-run bomb to right field, giving Chicago a 5-4 advantage.

The Pirates tried to make things interesting in the bottom of the ninth.  With two outs, Jose Tabata beat out Starlin Castro’s throw for an infield single.  But Neil Walker’s fly ball fell just a few feet short in center field, as the Cubs escaped with the victory.

This was a difficult loss for the Pirates, who seemed to be making the highlight plays throughout the game.  Going back-to-back-to-back in the fourth inning tied the game up, and then McCutchen’s run put them in front, and it seemed like they would hold off the Cubs.  But Grilli struggled tonight, and gave up the back-breaking hit.

The Bucs and Cubs will get back at it tomorrow night at PNC Park in the third of a four game weekend series.  First pitch is scheduled for 7:05pm.