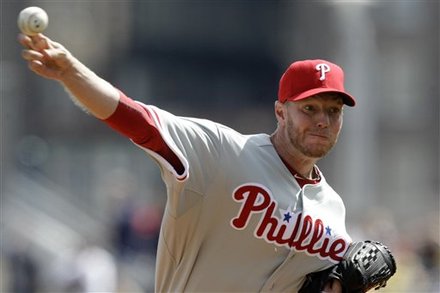 By Chad Carlson
The Pirates opened the 2012 season against the Philadelphia Phillies this afternoon at PNC Park, and as is the case every year on Opening Day, optimism was at an all-time high.  Not only were both teams on an equal-playing field before the game began today, but Pirates’ fans were remembering the excitement of last year’s first half when their team was in the middle of an unprecedented run to the top of the N.L. Central division, and were playing highly-competitive baseball through July.  We all know what happened in the final couple months of the year, but taking the next step, as the team has said they’re ready to do, began today.
Unfortunately, the Bucs faced one of the best pitchers in all of baseball, Roy Halladay, and that’s exactly the way he pitched today.  The Pirates’ first two batters tallied hits, from Alex Presley and Jose Tabata, and didn’t get another hit the rest of the game.  Halladay pitched eight shutout innings and Jonathan Papelbon recorded his first save as a Phillie, as the Bucs fell to their cross-state rivals, 1-0 on theNorthShore.
From the Pirates’ perspective, there were a number of positives and negatives to take away from today’s game.  Offensively, they were held in check all day long.  Andrew McCutchen grounded into a double in the first inning with two one and no outs during the Bucs’ one and only true threat to Halladay.  He, Neil Walker, Garrett Jones, and Pedro Alvarez combined to go 0-12 today.  Rod Barajas struggled as well in his three at-bats, as did Clint Barmes, who blasted a shot to the warning track in his first at-bat.  Overall, the Bucs’ hitters looked overmatched all day.
Despite the loss today, it was a strong performance by the Pirates defensively.  No errors were committed on the day as the defense made the plays they were supposed to, from Andrew McCutchen to Pedro Alvarez to Neil Walker.  Erik Bedard pitched seven strong innings for the Bucs, giving up just one run on six hits while walking one and striking out four.  Chris Resop and Juan Cruz each pitched a scoreless inning.
More often than not, when a Pirates’ starting pitcher gives up a run or less in seven or more innings, they’re going to win the game.  Today, that wasn’t the case.  Still, it was a solid start to the season for the Bucs, and while it would’ve been nice to win the season-opener in front of the record-breaking crowd atPNCPark, it was satisfying to see one of the team’s newest acquisitions pitch strong in his debut.
After a day off tomorrow, the Pirates and Phillies will face off again on Saturday at 7:05pm.  Cliff Lee will be opposed on the hill by Jeff Karstens.
Record vs. Phillies:  0-1
Record vs. N.L. East:  0-1
Record at Home:  0-1
Overall Record:  0-1
And…
As Always…
Let’s Go Bucs!