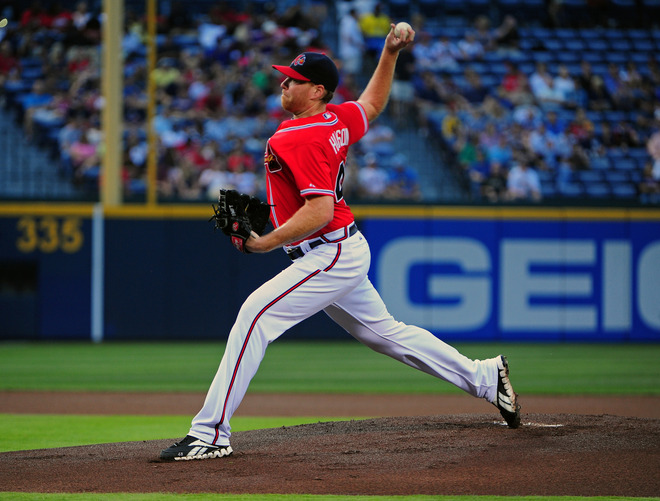 This story continues to be all too familiar.  The Pirates get a strong performance from their starting pitcher, while the offense continues to be dormant.  The result?  A 6-1 loss to the Atlanta Braves at Turner Field tonight.

A.J. Burnett started his second game of the season for the Pirates, and while he wasn’t quite as sharp as he was in his first start against the St. Louis Cardinals, he kept the Braves in check and gave his team a chanc e to win.  Wow, how many times have we said that already this year about a starting pitcher?  Burnett gave up two runs on six hits through six innings.  He struck out eight batters and walked three, two of which scored third and fourth innings respectively.

This weekend’s series pits two of the more solid bullpens in the National League, but the Pirates’ relievers didn’t live up to that reputation tonight.  Burnett was pulled from the game while the Bucs trailed 2-1.  But things fell apart in the seventh inning for Tony Watson and Evan Meek, who together gave up four runs, breaking the game wide open.  Watson was only able to record one out, while giving up a single and two straight walks before being pulled by Clint Hurdle.  Evan Meek came in and immediately gave up back to back two-run hits to Dan Uggla and Chipper Jones.  Despite the bullpen’s overall impressive efforts, Watson and Meek have been disappointing thus far, each with an ERA over 6.00.

The offense, once again, was a major issue for the Pirates tonight.  They tallied six hits as a team, but were only able to push one run across the plate.  They had a few opportunities early on, including the fourth inning, when they scored their only run of the game.  But with one out and the bases loaded, Rod Barajas grounded into an inning-ending double play.  That would be the last time the Bucs seriously threatened to score against Atlanta starter Tommy Hanson.

Alex Presley was the only Bucco to record a multi-hit game, while Andrew McCutchen, Garrett Jones, Neil Walker, and Casey McGehee each added a hit as well.

With as strong as the pitching has been this season, games like tonight continue to be devastatingly frustrating.  The offense needs to produce runs; that’s the bottom line.  Until that happens, the Pirates will continue on their current path, winning one, losing two, etc.

The Bucs will look to even the series at one tomorrow night at Turner Field.  First pitch is scheduled for 7:10pm.