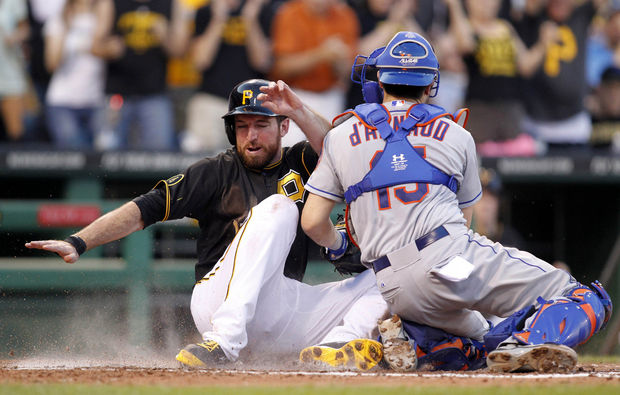 He may just be the biggest story in all of baseball this year and if the Pittsburgh Pirates have any chance of earning another trip to the postseason he will need to become an everyday player when the roster is healthy.  No I am not talking about Andrew McCutchen, it is Josh Harrison who seems to be that extra spark Pittsburgh needs to keep battling in 2014.

Harrison was not in the starting lineup, but a pinch hit opportunity in the seventh would lead to three at bats, with the most important coming in the eleventh with the game tied 2-2.  With Clint Barmes on first, Harrison would drive a ball to deep right center field to score the winning run.  He would also play Houdini in the tenth when he wiggled his way out of a rundown to take third base.

Brandon Cumpton continued this recent string of strong starting pitching by the rotation.  He would last seven innings, allowing two runs on six hits, while striking out four and walking one.  The New York Mets would score their two runs in the fourth on a RBI single by Lucas Duda.  The bullpen was solid with Justin Wilson, Mark Melancon, and Jared Hughes putting together four solid innings of shutout baseball.

The Pirates quickly answered that two run deficit in the bottom part of the fourth.  Jordy Mercer tied the game with a single to shallow center that brought home McCutchen and Ike Davis.  The game would remain tied until Harrison won it in the eleventh.

Game three of this four game series will take place tomorrow afternoon.  Gerrit Cole will make is first start since being placed on the DL with shoulder fatigue earlier in the month.  It will be key for him to have a strong outing and go for a series win.