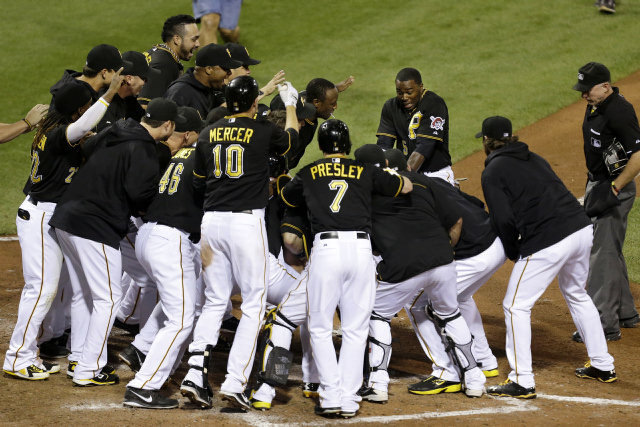 The Pittsburgh Pirates entered this week’s series against the Miami Marlins looking to avenge their series loss to the fish in Florida late last month.  After a sluggish beginning and a few missed opportunities, the Pirates came up with the big hit from Josh Harrison in the big moment, outlasting the Marlins for a 4-3 victory at PNC Park.

Jeff Locke started for Pittsburgh, and, for the second straight game, he had to battle the entire way through his outing.  Lasting 5.2 innings, Locke gave up three runs on nine hits with three walks and four strikeouts.  His ERA inflated a little more to 2.47 for the season, earning a no-decision, but again, as has been the case with starters throughout the year, gave his team a chance to win.  Vin Mazzaro, Tony Watson, and Bryan Morris collectively pitched 3.1 innings of shutout baseball, another phenomenal performance by the Shark Tank.

The Pirates got on the board in the third inning to make things interesting after falling behind by three runs early.  Andrew McCutchen’s two out, two run double scored Starling Marte and Neil Walker, putting the Bucs within a run at 3-2.  Pedro Alvarez followed with an RBI triple, scoring McCutchen and tying the game.

In the bottom of the eighth inning, Marte, Walker and McCutchen all reached base, loading the bags with no outs and Alvarez walking to the plate in a tie game.  But Pedro watched a 3-2 fastball right down the middle, ringing him up and setting him down for the inning’s first out.  Russell Martin grounded into an inning-ending double play to end the threat, much to the dismay of the crowd at PNC Park.

But after a one-two-three top half of the ninth, the Pirates took the lead for the first and only time in the game, and it was the game-winner.  Harrison hammered a pinch hit, leadoff solo homerun over the wall in right center field to give the Pirates a 4-3 victory.

What a game it was tonight for the Pirates.  The emotional roller coaster that this game had tonight was incredible.  After getting behind early, the Bucs battled back, tying the game, and, in the later innings, it actually looked like they might run away with the game.  Then, after a huge letdown in the eighth inning, they sealed the deal with a walkoff homerun in the ninth.  Absolutely incredible.

McCutchen led the Bucs with two hits and two RBI’s, while Walker added three hits.  It was a collective victory for this team, from the starter Locke to the bullpen to McCutchen and Alvarez.  This team is playing with an incredible amount of confidence, and it’s growing by the day.

The Pirates and Marlins will take the field again tomorrow at 7:05pm for the second game of the series at PNC Park.