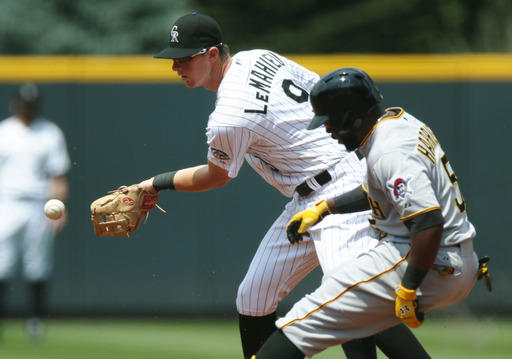 It had been an ugly return to Denver for Clint Hurdle and the Pittsburgh Pirates entering this afternoon’s game against the Colorado Rockies. The Bucs had been outscored 16-2 in the first two games of the series, and came into today’s game trying to avoid a three-game series sweep by a mediocre club.

The Pirates offense finally came alive today, hitting three homeruns on their way to a 7-5 victory, salvaging a game in this weekend series.

Neither starting pitcher put forth a strong outing this afternoon. Colorado’s Franklin Morales lasted just four innings, giving up two runs on six hits with five walks, while Edinson Volquez didn’t do much better, lasting just 4.1 innings, giving up four runs (two earned) on six hits and four walks. The Bucs touched up relievers Chad Bettis and Rex Brothers, which proved to be the difference in the game.

For the first time in the series, the Pirates scored the game’s first runs. Josh Harrison’s RBI single with the bases loaded in the second inning scored Jordy Mercer, and the Bucs had their first lead of the weekend. Gregory Polanco’s sacrifice fly scored Chris Stewart, increasing the lead to 2-0.

The Rockies cut the lead in half in the bottom of the second, though, on an RBI single by DJ LeMahieu, scoring Wilin Rosario. A three-run fourth inning put the home team up by a pair. Brandon Barnes hammered a two run homerun to deep left, which also scored Rosario. Charlie Blackmon’s RBI double to deep right center scored LeMahieu, and Colorado led 4-2 after four.

The Pirates, after looking dead in the water for a few innings, ignited for three runs in the sixth. Travis Snider’s pinch hit two run shot scored Stewart. Later in the inning, after Harrison singled, stole second, and advanced to third on a throwing error, Ike Davis doubled him home to give the Bucs a 5-4 advantage.

Nolan Arenado tied the game in the seventh with a solo homerun to deep center. But a pair of homeruns by Harrison and Polanco in the eighth put the Bucs in the lead for good.

While this was a disappointing series for the Pirates, today’s game was huge for them to win. The Milwaukee Brewers and Cincinnati Reds lost today, so it was crucial for the Bucs to take advantage of that with a win. They need to keep this N.L. Central race as close as possible down the stretch. Today’s game was huge, and this week’s series against the San Francisco Giants is even bigger.