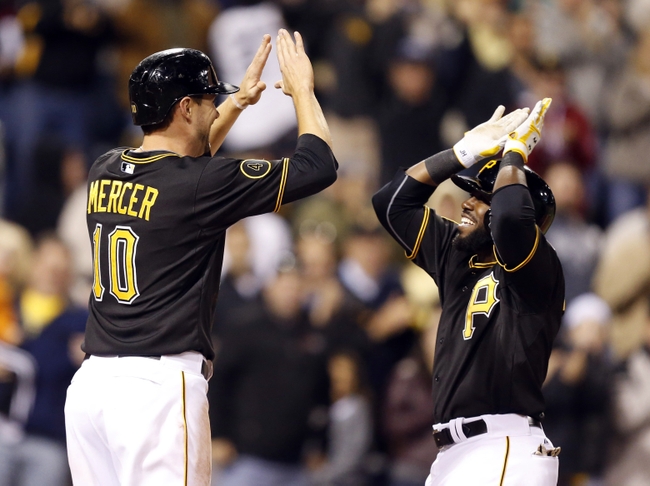 The Pittsburgh Pirates had a disappointing loss yesterday to open their weekend series against the Chicago Cubs.  Tonight, though, after a two hour rain delay, they took care of business on their way to a 5-2 victory at Wrigley Field.

Vance Worley made his second start for the Pirates, and for the second consecutive outing, he was solid for the Bucs.  He gave up three runs on five hits through 6.2 innings.  Jared Hughes and Tony Watson pitched in relief, setting the table for new closer Mark Melancon, who set the Cubs down quietly for the save.

Jordy Mercer recorded the game’s first hit in the top of the third inning, a leadoff solo homerun to deep left field to give the Pirates a 1-0 lead.

Chicago answered in the fourth inning with a pair of runs to momentarily take the lead.  Chris Coglan led off the inning with a single, and two batters later, Anthony Rizzo blasted a two run homer to right field, putting the Cubs in front, 2-1.

The Cubs’ lead didn’t even last an inning, as the Bucs answered for two runs of their own in the top of the fifth inning.  Mercer led off with a single, and later in the inning with two outs, Gregory Polanco drew a walk to put runners on first and second.  Josh Harrison and Andrew McCutchen followed with back to back RBI singles, putting the Bucs ahead, 3-2.

Harrison’s two run homerun in the seventh gave the Pirates some breathing room, scoring Polanco and increasing the lead to 5-2.  Eli Whiteside’s RBI double scored Darwin Barney to make it a 5-3 contest after seven innings.

Watson pitched a perfect eighth and Melancon closed things down in the ninth for the Pirates, securing a much needed victory to force a rubber match tomorrow afternoon.  Polanco increased his hitting streak to 11 games to begin his Major League career, while Harrison and Mercer each had two hits, while McCutchen added a hit, a walk, and an RBI.

The Pirates and Cubs will match back up tomorrow afternoon at 2:20pm for the rubber match of the series.  This is a much needed series victory for Pittsburgh before they head down south to take on the Tampa Bay Rays in Interleague Play.