Headley, Padres Walk Off Against Pirates In 10 Innings 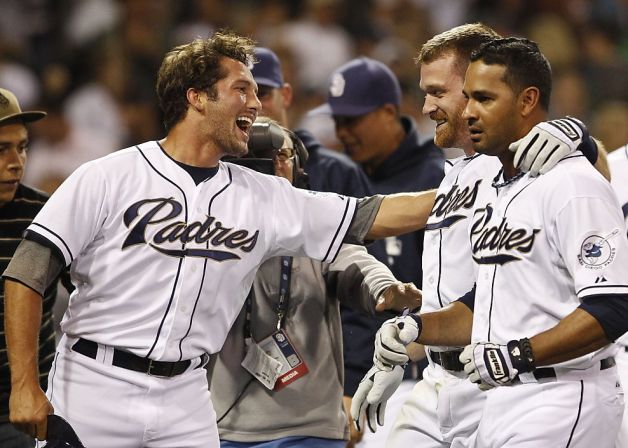 After taking two of three from the St. Louis Cardinals at Busch Stadium this past weekend, the Pirates and their fans hoped that momentum would carry over to the second part of this current road trip against the San Diego Padres atPetcoPark.  Unfortunately, the disappointing play against the Padres this season continued tonight, as the Bucs fell for the second straight game, this time 7-5 in extra innings.

Chase Headley hit a walk-off two run homerun in the bottom of the 10th off Daniel McCutchen to give the Padres their second consecutive win over the Bucs.  They have now won 17 of their last 20 games against the Pirates.

Pirates’ starter A.J. Burnett struggled tonight, just as he did the last time he faced the Padres back inPittsburgh.  Burnett battled his way into the seventh inning, giving up a total of four runs on twelve hits, while walking five and striking out seven.  He got himself out of some very tight jams, thanks to timely strikeouts and a number of solid defensive plays behind him.  Still, he struggled with his control, and he was hit hard at times throughout the night.

Padres’ starter Jason Marquis didn’t have near the success as he did when he took a no-hitter in the seventh inning against the Pirates at PNC Park.  The Bucs scored three runs (two earned) off Marquis on seven hits in his 5.1 innings of work.

Garrett Jones was a monster tonight for the Pirates, going 3-4 with two homeruns, a single, 3 RBI and a walk.  Travis Snider, Rod Barajas, and Clint Barmes each had two hits as well.

This one was a tough one to swallow for Pirates’ fans.  A.J. Burnett struggled again for the second straight start, which is disturbing enough in itself.  Andrew McCutchen continues to struggle as well; he’s just 5-25 on this road trip so far.  And the Bucs continue to be dominated by a Padres team that is mediocre at best against the rest of the National League.  The Pirates will need a victory tomorrow in the series finale to avoid the sweep and attempt to salvage a .500 road trip.

James McDonald will take the mound for Pittsburgh for the 6:35pm ET first pitch.