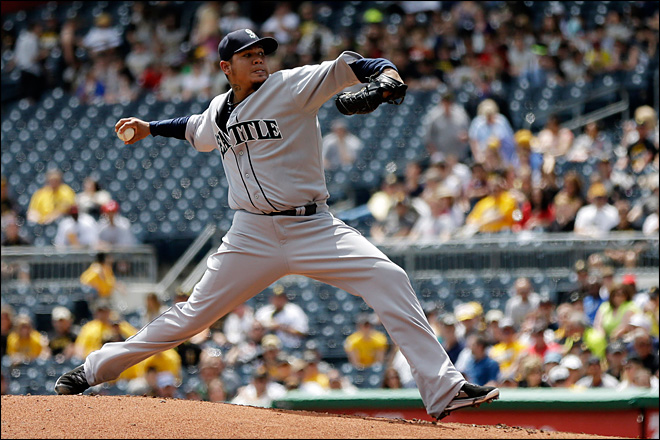 This afternoon’s finale of a short two-game series between the Pittsburgh Pirates and Seattle Mariners pitted two of the game’s best pitchers against one another.  Felix Hernandez and A.J. Burnett each pitched gems for their respective teams today, but one swing of the bat was the difference in a Mariners’ 2-1 victory at PNC Park.

After a rough first inning, Hernandez was sensational.  He gave up just one run on six hits through eight innings, lowering his ERA to just 1.53 on the season.  Not to be outdone, Burnett gave up two runs on two hits through his seven innings of work.  He did get himself into a couple jams throughout the game, though, due to his four walks.  But his nine strikeouts helped him get out of those jams.

Vin Mazzaro and Bryan Morris performed well out of the bullpen, each pitching a scoreless inning.

The Pirates took the lead in the first inning against Hernandez.  Starling Marte led off the game with a double, and scored on an RBI single by Andrew McCutchen.

After three easy innings, Burnett put himself into a difficult situation, issuing leadoff walks to Michael Saunders and Jason Bay.  But he responded well, getting three consecutive outs, including two strikeouts, but his wild pitch did allow Saunders to score from third to tie the game.

The Mariners took the lead in the seventh inning on a solo homerun by Jesus Montero.  It was only Seattle’s second hit of the game, giving them a 2-1 lead late in the game.  Even though the Pirates would be able to add a base runner here or there over the last few innings, they weren’t able to muster any type of late-game rally, and fell just short to Seattle.

This was a difficult game for the Pirates, especially after a promising start against Hernandez.  With the loss today, the Bucs concluded a 2-3 home stand, and they haven’t won a series in their last three opportunities.

The Pirates jump on a plane today, kicking off their road trip tomorrow against the New York Mets for a four-game series.  First pitch tomorrow is scheduled for 7:10pm.