Hurdle Speaks To Players About Expectations 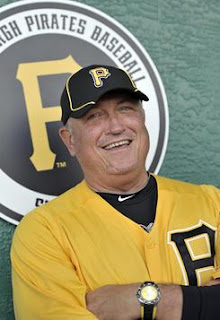 On Saturday morning, minutes before holding his first official full-squad workout, Pirates manager Clint Hurdle delivered a motivating speech to his players, addressing his expectations for the upcoming season.
In summary, Hurdle spoke to his team about on-field improvement as well as trust.
“There will be a group of men that turns this thing around here.  It will happen.  So why can’t we?  Why can’t we be the start?  We need to set our bar at the championship level, staring with the execution and a mindset.  We’ve got to think that way.  We’ve got to act that way.”
For the full story, check out the article at the Pirates Official Website:

Hurdle to team: This is the year to turn it around

So what should we, the fans, take away from comments like this?  First of all, it is always inspiring and uplifting to hear comments like these from Pirates’ management, especially considering the fact they are coming off one of the worst seasons in club history (57-105).  Pirates’ president Frank Coonelly shared the same enthusiasm as Hurdle, with expectations at an all-time high, considering the circumstances.

“I expect to see us compete,” Coonelly said.  “We’re all about doing.  As Clint said to the guys in there today, trying hard isn’t good enough.  This is a doing league and it’s time for us to start doing.”

Well first of all, both Hurdle and Coonelly are correct.  It is time to turn things around.  With talents like Andrew McCutchen and Pedro Alvarez, to name a couple, it seems as though the stage is set for the team’s situation to change.

However, if we look a little closer at these comments, it seems a bit confusing to the fans. Hurdle speaks to championship level expectations, while Coonelly is content with competing.  The casual baseball fan, oblivious to the reality of the Pirates’ situation, would set the bar high, at a championship level.  But to the majority of Pirates’ fans, those of us who have endured one disappointing season after another, we know this isn’t going to get turned around overnight.  We realize that change will occur over a series of steps, and the first is being able to compete on a daily basis.  The Pirates haven’t been able to do that for quite some time, but again, with the talent that is present in the locker room in 2011, this appears to be an achievable goal.  With better coaching and some motivation, this team can bring respect back to baseball.

On the contrary, we can’t ignore the fact that we, as fans, have heard these uplifting comments before.  Yes, before Hurdle, we were told that the days of consistently losing were soon by the likes of former managers, Jim Tracey, Gene Lamont, and John Russell.  That being said, it’s not fair to criticize Hurdle because his predecessors weren’t able to live up to their comments.  As we are now exactly one week away from the Bucs’ first spring training game of 2011, all we can do is hope that the players believe in the comments of their manager and president as much as the fans wants to believe it.
And…
As Always…
Let’s Go Bucs!