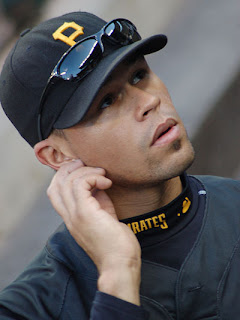 It really doesn’t seem all that long ago that Ian Snell was a promising young pitcher, occupying a sure spot in the rotation for the foreseeable future for the Pirates.
Now, only a handful of years later, the Pirates are in his rear-view mirror, along with the Seattle Mariners and the St. Louis Cardinals.  Snell announced his retirement this morning after being reassigned by the Cardinals to minor-league camp.
Snell had the pedigree and potential to be a solid MLB pitcher.  2004-2006 were standout years for the native, shining bright with the Altoona Curve and the Indianapolis Indians, before winning 14 games with Pirates in 2006.  While he certainly had room to improve, Snell was as promising as young pitchers come, at 25 years old he put together a season of 208 innings pitched with a 3.76 ERA.
As we all know, mental as well as physical issues plagued Snell, and the Pirates, before they shipped him away in July 2009, along with Jack Wilson, to for Jeff Clement and Ronny Cedeno, among others.  While he pitched decently at the end of 2009, last year was a bust for Snell and the Mariners, as he was paid $4.3 million to go 0-5 with a 6.41 ERA in 46 innings pitched.
After being released by , signed him to a minor league deal and invited him to Cardinals’ Spring Training.  He didn’t last long there, and after being sent to minor league camp, announced retirement.
Do you want to know what I call people who retire, uninjured, before they’re 30 years old?  Quitters.  And that’s exactly what Ian Snell is, and was.  You can blame it on psychological issues.  The bottom line is, the guy could never handle defeat or criticism.  Ever wonder why there weren’t many issues with him during his first full year in the league?  It’s because he was winning…performing well…and he had a lot of promise.  As the performance increased, so did the expectations.  As bad as the Pirates’ pitching has been in the past few years (and it’s been BAD), I am very pleased that management sent that head-case out of the city, regardless of their reasoning behind the move.
Real MLB players can handle the pressure and still perform at a high level.  Ian Snell is in no way a top performer, and he doesn’t belong in Major League Baseball.  Good riddance.
Comments on Ian Snell’s retirement?  Leave a comment below or send us an email at comments@fansfromthestands.com
And…
As Always…
Let’s Go Bucs!