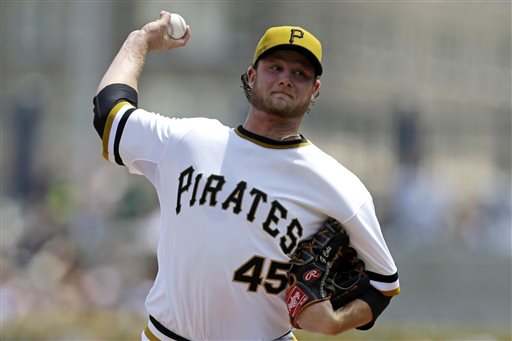 With the unofficial first half of the season now over, fans of the Pittsburgh Pirates have a lot to look forward to when the season resumes on Friday night.  The one thing that will need to change over the course of the final two and a half months is the ability of the offense to produce the big inning.  That inability cost them once again today in the series finale against the New York Mets.

New York jumped on the board early with a three run first inning off of Bucco starter Gerrit Cole.  He originally was not going to start today, but when Jeff Locke was scratched with a back injury, Cole got the nod.  Gerrit did not look comfortable throughout his five innings of work today as he labored through the first four innings.  He would leave the game, allowing three runs on six hits, while walking two and striking out five.

Jeanmar Gomez and Vin Mazzaro would finish off the final four innings of work today.  Gomez allowed one run on three hits, while Mazzaro would blank the Mets and finish with one walk and one strikeout.  Even with the rough start, the pitching staff kept the game close for the bats to do some work.

Pittsburgh finally put a run on the board in the third with a Starling Marte hit a RBI ground rule double.  Marte then had a prime opportunity to strike again in the seventh with runners on first and second, but he would get caught looking at strike three to end the threat.  The only other run that crossed the plate for the Pirates today was in the eighth.  Jose Tabata would ground out to second allowing Jordy Mercer to score.

The eighth inning should have been a big inning for the Buccos as they had runners at second and third with no outs.  Unfortunately the ineffectiveness of the offense showed as Pedro Alvarez struck out, Tabata grounded out, and Garrett Jones flew out to end the inning.  The ninth inning also had potential with runners on first and second with one out, but Marte and Mercer would both fly out to end the game and send the Buccos to a 4-2 loss.

While it would have been nice to head into the All-Star break with a win, it is nice to see Pittsburgh near the top of the standings and be in postion to battle for the rest of the season.  As fans we should do what the players do for these next four days and rest up for what should be a very exciting second half to come.