Is The Pirates Ship Sinking Again? 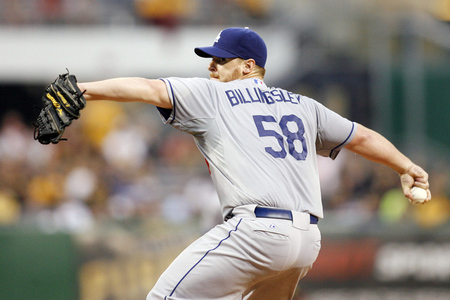 Things are beginning to turn for the worst for our Pittsburgh Pirates. Tonight they were embarrassed, but it was not because of the Los Angeles Dodgers, but by the Buccos themselves.  A slew of errors, mistakes, and a missed call by an umpire led to the 11-0 beatdown.

For the past couple weeks, I have been saying that each night the Pirates have had at least one aspect of their game not go right, win or lose.  Tonight it was everything.  The offense was silent with five hits and zero runs.  Andrew McCutchen 0-4 with 2 K’s, Pedro Alvarez 0-3 with 2 K’s, factor that in with Clint Hurdle’s two favorite players Clint Barmes and Rod Barajas going 0-6 combined along with no other player earning more than one hit and it is easy to see why this team was shut out.  This offense has no medium level, they either score ten runs, zero runs, or one player carries them to four runs each night during this stretch.

The pitching was not good tonight, but the defense did not help the cause.  Kevin Correia would stagger through six innings allowing five earned runs on seven hits while walking one and striking out three.  Jeff Locke and Chris Resop pitched 2 2/3 of shutout baseball, the only problem was that Chad Qualls was in the middle of those two.  Qualls pitched 1/3 of an inning allowing five runs on four hits, with a walk.  All that great front of the rotation to the back of the bullpen stuff is out the door.  The starters are losing their edge and the bullpen has become very inconsistent.  This is very reminiscent of last year’s collapse.

My god was the defense awful tonight.  I could hear Little League All-Star teams in Williamsport laughing.  The scorekeeper for the game was being nice giving the Buccos only two errors.  The fourth inning alone will be on SportsCenters not top ten.  Matt Kemp hit a ball right into Alvarez’s glove, but of course it deflected out and Kemp reached base.  Andre Either hit a slow roller to second, where Neil Walker was said to have lost the ball as he applied the tag to Kemp.  Next a little chopper down the line stayed fair on the infield grass and just like that the bases were loaded with no outs.  The Dodgers would plate three runs on that inning.

The eighth inning saw Garrett Jones deflect a grounder off his chest that allowed Either to reach.  That ended up to be foreshadowing for the ninth inning.  With two batters on Barajas was charged with a passed ball allowing both runners to move into scoring position, then came a walk to load the bases.  After Kemp singled in a run, Either struck again.  He would single to left field, where after a run scored, Starling Marte had Juan Uribe dead to rights at home, that is until Qualls cut the throw off and mistaked Alvarez for Barmes.  I know, I get the two mixed up all the time, well at least when I look in the batting average column, that mistake garnished the second error of the night.

For weeks I have said the difference between this Pirates team and those of the past is that they avoid the big slide.  Well don’t look now folks but the big slide is upon us.  They have lost 5 of 6 and have a 5-8 record for this month.  Tonight’s loss also clinched a losing home stand for the Buccos, which is something that has not occurred all season.  The biggest problem is that it is happening in mid-August.  Had this been going on in April then there would be plenty of time to fix the leak, but it is going on when the teams around the Buccos are getting hot.  The Cincinnati Reds are pulling away, the St. Louis Cardinals are closing in, and the Dodgers are getting ready to pass us up.  So Pirates one question for you, can you please get to .500?