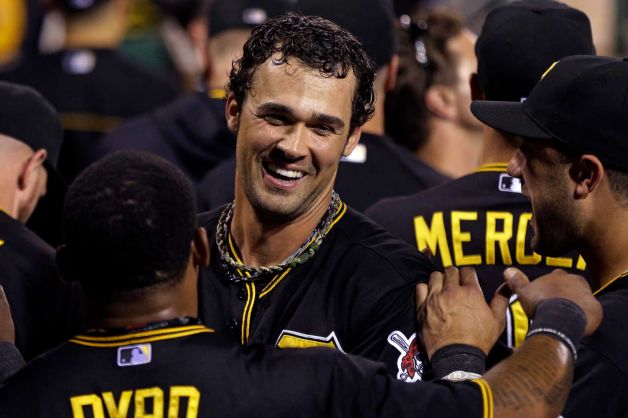 Well here we go again.  Tonight kicked off another HUGE series between the Pittsburgh Pirates and St. Louis Cardinals.  After losing two of three games to the Milwaukee Brewers, the Bucs trailed the Cards by one game in the N.L. Central division entering tonight.

After three days off to work on his mechanics at the plate, Garrett Jones returned in a big way tonight, going 3-4 with four RBI’s to lead the Pirates to a 5-0 victory over the Cards at PNC Park.

Jones had been struggling at the plate for weeks, but after sitting out the entire series against the Brewers, he was placed back in the lineup tonight against the Cards’ Shelby Miller, whom Jones had had success against in the past.  Tonight continued that trend, as G.I. had a homerun, a double, and a single off the St. Louis right hander.

The Bucs jumped on Miller & the Cards early tonight.  Jones’ two run double in the first inning scored Jose Tabata and Neil Walker.  After G.I. belted a solo homerun in the fourth inning, Russell Martin hit the very next pitch over the wall to extend the lead to 4-0.  An RBI single in the fifth, GI’s third and final hit of the  night, drove home Marlon Byrd for the game’s last run.

While Jones was the offensive star of the game, Francisco Liriano was just as impressive on the mound.  The Pirates’ left hander dominated the Cardinals’ hitters, giving up just two hits and two walks while striking out six batters in eight innings.  He lowered his ERA to 2.57 while winning his 15th game (15-6) of the season.  Mark Melancon came in and closed things down in the ninth.

This was a great start to a vital series against the Cardinals.  Tonight’s game was really never in doubt – Liriano was dominant from the beginning, and the Bucs’ offense seemed to have an edge on Miller throughout.  After tonight, the Pirates and Cardinals are tied for the division lead, with two games remaining this weekend.  As the month of August draws to a close, it’s obvious to the Cardinals, and the rest of Major League Baseball, that the Pirates are not going away.

Pittsburgh and St. Louis will match back up tomorrow night at 7:05pm at PNC Park.  Lance Lynn will take the mound for the Cards against the Bucs’ A.J. Burnett.