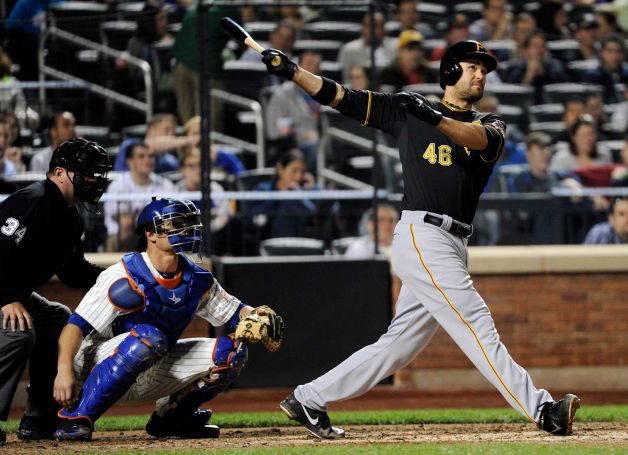 All of a sudden, the Pittsburgh Pirates were struggling to score runs.  Yesterday’s 3-2 loss to the New York Mets marked another game in which the Bucs got a great performance from their starting pitcher, but they weren’t able to take advantage with much offensive output.  Tonight, the bats came alive, particularly that of Garrett Jones, as the Pirates put some crooked numbers up on the board on their way to a 7-3 victory.

Jones went 3-5 with a homerun, two doubles and three RBIs.  His three-run blast in the fifth inning, scoring Starling Marte and Jordy Mercer, broke the game wide open.  Marte had three more hits tonight along with an RBI and was also hit by a pitch, raising his batting average to .333 for the season.  Mercer added two hits, as did Pedro Alvarez, who added an RBI.

As for the pitching, Wandy Rodriguez returned to form tonight, tossing six innings, giving up just one run and six hits without walking a batter.  He earned his third win of the season, while Vin Mazzaro pitched two strong innings in relief.

Unfortunately, Jose Contreras did not have a good outing at all.  Clint Hurdle brought him in to close things out in the ninth, but after giving Contreras up two runs on three hits and a walk, the Bucs’ skipper had to call in Jason Grilli to earn a one-out save (his 14th of the season).

Interestingly enough, this was a nightmare evening for Andrew McCutchen, who was given every opportunity to have a huge night at the plate.  He came up with the bases loaded in the second inning and two runners on in the fifth inning, but was unable to push a run across.  He then came up with the bases loaded again in the ninth inning, only to ground into a double play.

This was a big win for the Pirates, who need to start playing better baseball consistently after what has become a rough past week or so.  They have evened things up with the Mets with two games left this weekend.  Francisco Liriano will make his Pirates debut tomorrow afternoon.  First pitch is scheduled for 1:10pm.